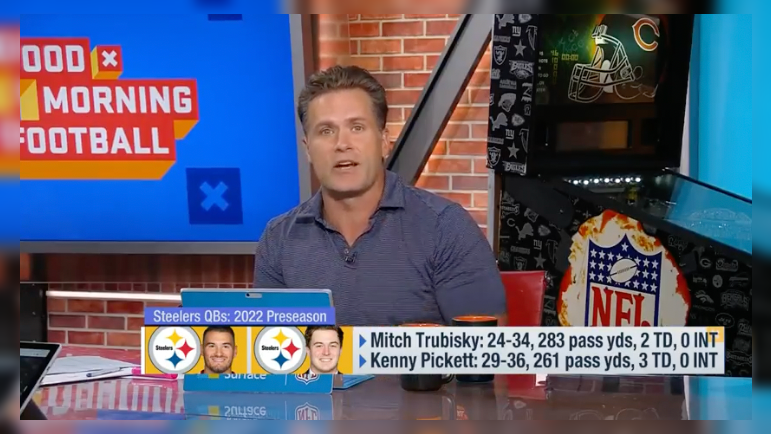 The Pittsburgh Steelers might have a starting quarterback in mind, though head coach Mike Tomlin isn’t going to reveal that anytime soon as the black and gold continue to go through the evaluation process.

That hasn’t stopped the debate between Mitch Trubisky and Kenny Pickett from raging on with talking heads. It started right up again Monday morning on Good Morning Football on NFL Network with co-hosts Jamie Erhdal, Kyle Brandt, Jason McCourty and Mike Garafolo. After the Steelers’ 19-9 win over the Detroit Lions at Acrisure Stadium to close out the preseason Sunday, all the attention for the Steelers shifts to the quarterback battle.

Trubisky looked the best of the bunch on Sunday, finishing 15-of-19 for 160 yards and a touchdown, leading a masterful 92-yard scoring drive in the two-minute drill to close the first half. Make no mistake about it though: Pickett looked solid in action on Sunday as well, finishing 10-of-14 for 90 yards, making a case for the starting job.

Mike Tomlin ‘Might’ Have A Starting QB In Mind, But We’re ‘Not Gonna Have It Today’

It feels like Trubisky’s job at the moment, but for Brandt, it should be Pickett moving forward, especially if the Steelers believe they have a special talent in the rookie.

“I think if you look at this, they both played well. So, you go with Trubisky because he is way more experienced. He knows how to be a number one. He knows how the media, all that stuff. And yet guys, I can’t shake this Pickett thing,” Brandt said, according to video via GMFB’s Twitter page. “Because I think Trubisky is Trubisky, flashes of really good and then some like long stretches of decency. If Pickett is special though, like don’t, you have a gut? Mike Tomlin will make the decision. And I just, I keep coming back to this: He is a coach who, I do what I want, and I answer to nobody. One of maybe five or six in the whole league who is just in a vacuum, I don’t have to appease anyone. Not no one upstairs, no one out there. I do what I want to do.

“If he has a feeling that Mitch has been great, can he seem special? And I wanna get to the super bowl this year. And I don’t care if it’s a rookie quarterback. I think that’s when you do it,” Brandt added. “If you just wanna sit back and say, ‘well, Mitch, didn’t lose the job and we’ll go to battle with Mitch and 10 and seven would be amazing.’ Or we think we got something. We think we have a Russell Wilson-type as a rookie. We think this Kenny Pickett has magic. We’re gonna take a ride on it. …I think Pickett has it, and I want to see him out there Week One.”

Who should start the season as the Steelers' QB? pic.twitter.com/tBnzKPWAdU

It really is a tough decision. There’s a lot of factors in play. So far throughout training camp and the preseason, Pickett looks ready overall. The moments haven’t been too big for him, his processing remains at a lightning-quick pace, and his accuracy continues to stand out. That said, the offensive line remains a bit of a mess, and Trubisky has been prepared all offseason as the starter.

Sending Pickett into Cincinnati against a great Bengals team in Week 1 that features a terrific defense could be a very difficult test, but it’s sink or swim in the NFL, and once he does see the field he’s going to face great defenses. There’s never an easy opportunity for the Steelers to insert their prized rookie into the lineup.

For McCourty and Garafolo, the fact that Trubisky has the experience on game days and knows what it takes to be the starting quarterback, deal with the media, gameplan at the NFL level and adjust in-game is the main reason he should be the Steelers’ starter moving forward. Not only that, McCourty pointed out the fact that the Steelers start to the season (at Bengals, vs. Patriots, at Browns on Thursday Night Football) is a brutal opening stretch featuring some great defenses and Bill Belichick.

That’s a tall task for a rookie, which is why the veteran defensive back believes the Steelers are better off going with Trubisky early and letting things play out on the field.

Erhdal didn’t feel that way at all, leaning with Brandt, in large part due to the defense the Steelers currently employ.

“Start him, play him against anybody, because how we have gotten to the fourth person in this conversation and as no one has mentioned the fact that the Steelers’ defense is so life changing, that they will handle their business,” Erhdal said, according to video via GMFB’s Twitter page. “…They’re gonna handle it just fine. So now that the ship is already being led by the Steelers defense, allow Kenny Pickett to be your guy, just let ’em take over.

“It’s what the people want. He’s a Pittsburgh guy,” Erhdal added. “He’s been walking those halls the last five years, six years, it feels like, as a Pitt Panther.”

The defense could surely help the transition to Pickett, keeping the Steelers in games while letting the rookie quarterback get his feet underneath him in regular season action, make some mistakes and really learn on the job. Still, that’s a lot to put on the defense, much like its was a lot to put on the defense in 2019 after Ben Roethlisberger went down with an injury and the Steelers had to roll with two inexperienced quarterbacks.

Pickett has plenty of experience coming out of college, but the NFL is a different world. In the end, that three-week stretch to open the season with three games in 11 days might be a bit too much to throw the rookie into, leading to Trubisky being the guy early on, getting a chance to cement his job — at least for the time being.

It’s a fascinating debate though, one that continues to rage on due to the strong play from both in the preseason. This is best-case scenario the Steelers could have hoped for all offseason.