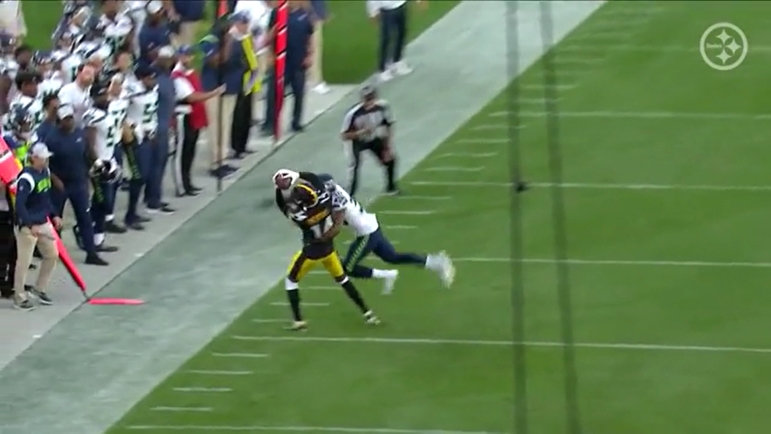 Seemingly each and every day in training camp at Saint Vincent College in Latrobe, Pittsburgh Steelers rookie wide receiver George Pickens made play after play that turned heads and created headlines for the black and gold.

Pickens, the 11th wide receiver taken in the 2022 NFL Draft, has certainly looked like the best of the bunch so far. He’s shown off his impressive physicality, speed and insane body control throughout training camp and into the Steelers’ preseason opener against the Seattle Seahawks at Acrisure Stadium.

There was the toe-tap catch for a touchdown on a gorgeous throw from quarterback Mason Rudolph, and then there was the twisting, toe-tapping catch along the right sideline in the second quarter with a defender draped all over him that turned heads, as well.

Steelers star safety Minkah Fitzpatrick has gotten un up close and personal look at Pickens throughout training camp, even going against him for some reps in 1-on-1s, and has seen just how special the rookie receiver is, telling the Pittsburgh Tribune-Review’s Joe Rutter that Pickens’ body control is “something serious,” and that he’s a player to watch out for due to his natural abilities at the position.

“His body control is something serious,” Fitzpatrick said to Rutter, according to original reporting from the Tribune-Review. “You saw it Saturday night in the back of the end zone. Everything looks easy and natural to him. It’s not a bunch of rigid, sharp movements. He had one today. I was all over his hip, I hit him, the ball hit his elbow and it still looked easy and natural to him.

“There are guys who are good at going up and getting the ball that are his size. But sometimes turning and opening their hips is hard or turning and coming back to the ball downhill is hard. He gets in and out of his breaks smooth, and he adjusts to deep balls well.”

Fitzpatrick doesn’t praise players often, especially offensive players, so his words about Pickens certainly earned some attention overall. That’s how special Pickens has looked throughout training camp and into the preseason. The buzz surrounding the tantalizing rookie is growing louder and louder by the day, both within the Steelers locker room and throughout the national media.

Coming out of Georgia, one of the key traits that was often praised about Pickens was his overall body control for a big, physical receiver. It showed up on tape consistently during his tenure with the Bulldogs. Steelers Depot’s own Jonathan Heitritter wrote this about Pickens in his draft profile for the site prior to the Steelers selecting him: “When going back through Pickens’ tape from previous seasons, you see a jump ball savant that plays with the body control and spatial awareness to come down with some absurd catches in coverage. His length, leaping ability, and ability to concentrate on the football while in the air make him a legitimate weapon on the outside on possession downs as well as in the red zone.”

How he continues to build upon his impressive start to his Steelers career will be key. If he can continue to stack good days, like Mike Tomlin likes to say, and continues to make plays in the air, Pickens will become “something serious” to deal with for a long, long time in the NFL.