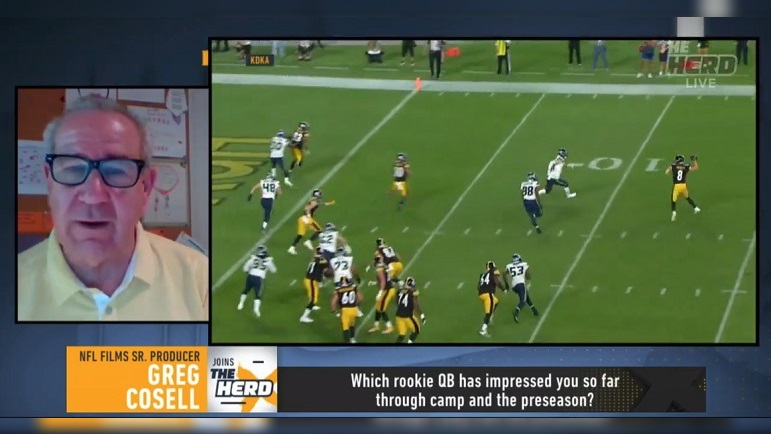 The Pittsburgh Steelers spent their first two 2022 draft picks on quarterback Kenny Pickett and wide receiver George Pickens and with one preseason game under the belt for each, the great Greg Cosell of NFL Films has delivered his early thoughts on the two players, who will be back in action again Saturday night on the road against the Jacksonville Jaguars.

During an appearance a few days ago on ‘The Herd with Colin Cowherd’, Cosell was essentially asked if he thinks that Pickett should be the Steelers starting quarterback come Week 1 of the regular season.

“Yeah, and I think they in some ways they’ve told you that,” Cosell told Cowherd. “They’re saying all the right things now, of course, which all teams do. But don’t forget, they signed Mitch Trubisky, it’s a deal they can get out of after one year. They know what Trubisky is. Everybody does, yet they drafted Kenny Pickett with the 20th pick in the first round. That really told you all you needed to know.

“And when you watch Pickett, obviously it’s one preseason game, and I’m a firm believer and I say this all the time, I’m never defining a player’s career on a preseason game, but Pickett just has the look and feel of an NFL quarterback. He’s strong in the pocket. He’s decisive. He’s precise with his ball location. Does he leave the pocket too soon at times? Yes. That may come with experience. He can move. He has second reaction ability. I think Kenny Pickett is their best quarterback and should be the Week 1 starter.”

That’s quite an assessment by Cosell, who is regarded as one of the top major media film junkies in the world. Cosell’s assessment aside, and he was quick to point out, Pickett has played just one preseason game so far and he entered that contest in the second half. Saturday night should be a better test for Pickett as he should be the second quarterback into the road preseason game against the Jacksonville Jaguars and that means he should get to play with a lot of the other offensive starters.

How both Pickett and starter Mitch Trubisky play Saturday night against the Jaguars should clear up things at the quarterback position quite a bit more. Obviously, if Trubisky has a rough outing Saturday night and Pickett follows him into the game and plays well, you can bet there will be a collective and loud cry from a majority of the team’s fan base for the rookie to be the team’s starter in Week 1. In short, let’s wait and see how Saturday night goes for the two quarterbacks.

As for Pickens, who right now appears to have been the steal of the 2022 NFL Draft at the wide receiver position with Week 1 of the preseason now completed, Cosell is also very high on him after watching the tape from his first preseason game played. Cosell, by the way, was high on Pickens ahead of the 2022 NFL Draft.

“Based on film, and that’s all I do, I don’t get into the character and the other issues which teams do get into, which is why he did drop, by the way, but I thought he was the best receiving prospect in this draft class based on tape,” Cosell told Cowherd. “I thought he fit the profile of an NFL boundary X-receiver, the receiver that lines up to the short side of the field and can win one-on-one. His body type is similar to an A.J. Green. He’s very explosive off the ball. He eats up space in a hurry. He’s physical, he’s competitive. I thought the tape said that George Pickens was the best receiving prospect in this draft class.”

Cosell comparing Pickens to Green isn’t surprising as that has been a popular comp that has been floating around on the Steelers second round draft pick out of Georgia for quite a while. Pickens had a great rookie training camp and his play in the team’s first preseason game last Saturday night was impressive and that includes his play when the ball was not thrown his way. Pickens, for lack of better words, has looked like the real deal to date.

The Steelers’ future obviously depends on both Pickett and Pickens being great players and it will be interesting to see how the team’s top two draft picks progress in the final two preseason games. Both should get an opportunity to play together Saturday night in Jacksonville against the Jaguars and that contest might provide us with our first ever Pickett to Pickens connection. After the Saturday night game has been completed, it would be interesting to hear Cosell give more of his thoughts on the play of the two players after watching the tape from that contest.