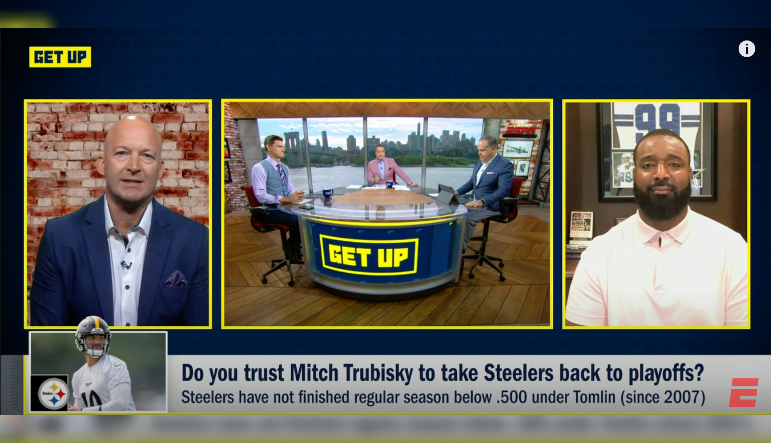 When thinking of the situation transpiring under center for the Pittsburgh Steelers in the three-way competition between veterans Mitch Trubisky and Mason Rudolph and rookie first-round pick Kenny Pickett, oftentimes it doesn’t leave everyone feeling warm and fuzzy.

That’s largely based on the public perception and lack of belief in both Trubisky and Rudolph, who have started 50 and 10 career games, respectively. After struggling as the former No. 2 overall pick with the Chicago Bears before then sitting behind Josh Allen in Buffalo for a season, the exceptions are relatively low on Trubisky.

Same for Rudolph, who despite having a winning record in 10 career starts, just hasn’t quite shown enough to create a positive, comforting reaction when he’s on the field.

Despite some of the outside noise and lack of belief nationally in the two veterans vying for the starting job in Pittsburgh, former NFL quarterback and current NFL analyst Tim Hasselbeck, appearing on ESPN’s Get Up! Friday morning, stated he believes that Trubisky is a better player than the general perception of him, but added that even with Trubisky being better than believed, the Steelers aren’t a playoff team in 2022.

“I think that Mitchell Trubisky is a better player than the general perception of him, because the situation in Chicago wasn’t great; he didn’t have a ton of starts in college. I think he’s a much better player today than he was in Chicago, so I think he can have some success,” Hasselbeck stated on ESPN Friday morning, according to video via the ESPN YouTube page. “But I think it’s kind of a muddy situation. I didn’t love the Pickett selection. I do think Mason Rudolph is a guy that can have a very long career in the National Football League.

“I think the challenge is that the future is clearly Kenny Pickett, and so at some point you either have to deal Mason Rudolph, you have to give Kenny Pickett the opportunity to play, so I think ultimately I don’t see them as a playoff team in that division, and I think we’re going to see Kenny Pickett before too long.”

It’s a curious stance from Hasselbeck overall. He states he believes Trubisky is a much better player than the general perception surrounding him, but then turns around and says that the Steelers will play Pickett before too long. So which is it, exactly? Can it be both?

Chances are, Trubisky is better than many outsiders believe in a system under second-year offensive coordinator Matt Canada that is much more tailored to his skillset and makeup, compared to the system he worked in with Chicago under former head coach Matt Nagy. But the fact remains the Steelers invested heavily in Pickett with a first-round draft pick in the 2022 NFL Draft, and he’s very clearly the intended future in the Steel City.

The Steelers might not be a playoff team in 2022 in a tough AFC North, but that might not be due to the play of Trubisky, who is better than people are giving him credit for overall, though being “better” than people believe might not be enough to truly move the needle for this Steelers’ offense this fall.