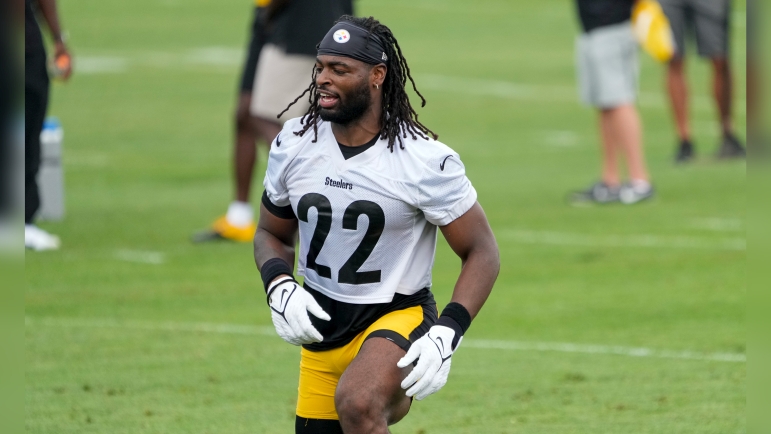 Upon entering the NFL as a talented running back out of the University of Alabama, Najee Harris stepped into the fold for the Pittsburgh Steelers as the true bell cow running back that head coach Mike Tomlin and former GM Kevin Colbert were looking for.

With his chiseled physique and his impressive stamina, Harris showed right away in the NFL that he could handle a significant workload as an old-school bell cow running back on the ground and through the air, amassing an NFL-high 381 touches as a rookie in 2021, gaining 1,667 total yards and 10 touchdowns in his first season in the league. Though those numbers were due to volume more than anything else, Harris played his tail off as a rookie, leading the NFL by a wide margin in forced missed tackles on touches with 92, and really set the tone offensively from a physicality and determination standpoint.

Entering his second season though, Harris wants more. He’s put in the work, coming into OTAs, minicamp and now training camp at Saint Vincent College with some added weight and an impressive frame overall that appears even more chiseled than it was coming out of Alabama under Nick Saban. That’s a testament to his work ethic and overall mindset, which ESPN Steelers beat writer Brooke Pryor was able to get a behind-the-scenes look at this summer, following Harris around during workouts in Texas for an in-depth piece on Harris that published Wednesday on ESPN.com.

Those outside the game of football are rather blown away and impressed with Harris’ physique. He looks like a cartoon character with his chiseled frame and tree-trunk size thighs that have him prepared for another heavy workload in 2022 as the Steelers’ offense enters a period of transition without quarterback Ben Roethlisberger under center. Based on the work he put in throughout the offseason, and the experience he gained in 2021, Harris is ready for the challenge.

One former NFL player who knows all about carrying a heavy workload and having a ton of hopes and dreams of an offense pinned on his success is future Hall of Fame running back Adrian Peterson. Peterson spent time with Harris in Texas working out in an effort to catch on with an NFL team at some point in the 2022 season. He’s quite familiar with Harris overall, but seeing the work Harris put in this offseason and the transformation his body underwent, Peterson told Pryor he had to do a double take at times looking at Harris, calling him the perfect dimension for a running back.

High praise from one of the best to ever do it.

“He’s a big-bodied kid,” Peterson said to Pryor, according to original reporting from ESPN.com. “I caught myself a couple times looking at him. I’m like, golly, this boy’s thick. He’s not fat at all. He’s just big-boned. He’s thick and strong, and those big quads. Those big legs and upper body. He’s well-put together. He’s like the perfect dimension for a running back.”

I’d imagine that NFL defenders have the same thought process as Peterson does when they get a look at Harris prior to kickoff, or when the 6-foot-2, 232-pound running back is barreling downhill at them. Though he had his fair share of success in 2021 with a heavy workload, creating some highlight-reel plays with his strength as a runner and receiver in the open field, Harris is aiming for more in 2022 behind a rebuilt line with the additions of Mason Cole and James Daniels in free agency.

Built like Tennessee’s Derrick Henry with the elusiveness and versatility of Le’Veon Bell, Harris showed quickly he’s the ideal package for the Steelers to lean heavily on offensively. He’s a real problem for defenders due to his size and strength, and he can be moved all over the field, creating a mismatch for defensive coordinators to try and defend.

With his build and his play style, he comes off as the near-perfect dimension and makeup of a running back for today’s game, especially when adding in the durability and dependability. Hopefully that continues in 2022 and beyond. The Steelers are counting on it.

Najee Harris' ability to get yards after contact is pretty ridiculous. Don't know how he turned this into a six-yard gain. #Steelers pic.twitter.com/ZTd7e7qNBS