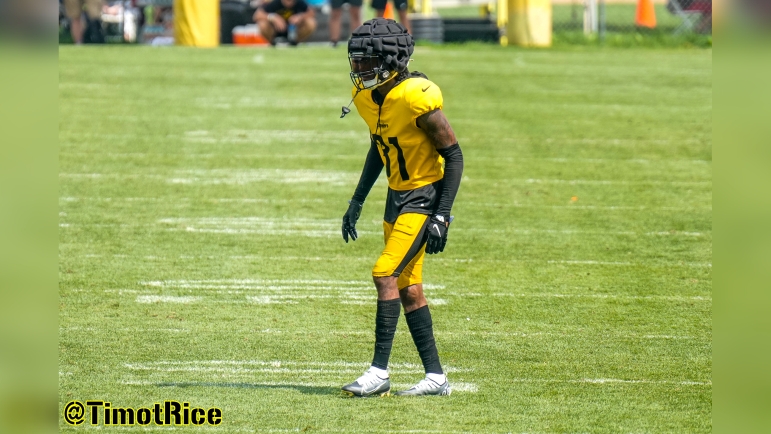 Today is the first of three Pittsburgh Steelers’ preseason games, the best chance for players to solidify their roster spot. Of course, it’s a chance to also lose ground in a roster race. To a lesser degree, training camp also provides those ebbs and flows, risers and fallers throughout the process. The risers are generally well-documented. Names like RB Jaylen Warren, CB James Pierre, ILB Mark Robinson, OLB Delontae Scott. The fallers have been discussed less but throughout the first 12 public practices, I’ve found five Steelers on the roster last year whose odds of making it again are slipping.

CB Justin Layne – Perhaps the biggest faller of them all. As Pittsburgh’s CB room has gotten healthier with Levi Wallace returning full, Layne has been fighting for playing time, working third-team corner and often splitting snaps with Linden Stephens. Layne got off to a decent start to camp but has faded since, struggling to make plays on the ball and generally being outplayed by James Pierre. Entering the last year of his rookie deal and only ever reaching solid special teamer status, Layne looks to be on the outs.

SS Miles Killebrew – Killebrew might be the most controversial player on the list. With seemingly high odds of making the roster entering camp, he suffered a pec injury during the first practice. He missed about two weeks time but returned late last week though ran as a third-string safety behind Karl Joseph. Joseph has had a strong camp and offers more as a safety and slot corner. Killebrew was a quality special-teamer last season and re-signed on a two-year deal, two things working in his favor this summer, but his odds of making the team have decreased given his injury and the play of others around him.

WR Cody White – White ran with the 1’s to start training camp. Currently and somehow predictably, he’s a clear backup and running behind the likes of Miles Boykin and Anthony Miller. White has size and versatility and some special teams value but he struggles to create separation and his athletic tools are average at best. He may land on the practice squad but a path to the 53 is tough, even as the sixth WR. It’ll take an injury for him to make it. At best, he’s the #8 WR on this team.

OL John Leglue – Leglue became a feel good story a year ago, finishing the year out as the team’s starting left guard. His calling card is versatility, playing literally every offensive line spot over the last two summers, though the majority of his work has come at center and guard. But his camp has been uneventful and he’s struggled in 1v1s. Leglue is trying to make it as the team’s ninth offensive lineman but there’s no guarantee they keep a ninth, and if so, I could see someone like Trent Scott compete with Leglue for a spot. If Pittsburgh keeps, say, seven defensive linemen, they may reduce their O-line by one. Leglue is close to the bubble but leaning outside-looking-in heading into tonight.

WR Anthony Miller – Despite injuries last season, Miller struggled to get a hat in 2022. He got off to a strong start this camp, emerging over the padless practices, working in the slot and on the outside. But he’s faded since, dropping more passes than he should and not being as efficient with his targets. Meanwhile, Miles Boykin has come on strong and appears to be in the lead for that #6 wide receiver spot. With Chase Claypool getting slot reps and Calvin Austin III playing well overall, there may not be a big need to have Miller in a backup slot role on this team. Miller has enough experience and talent to change his fortunes but he needs to look like the receiver I saw earlier this camp.