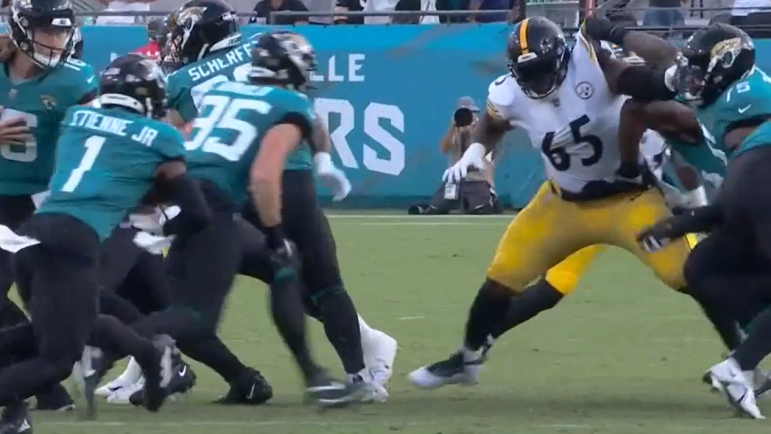 It may have taken a bit longer than many would have liked, but the debut in the black and gold for new Pittsburgh Steelers defensive lineman Larry Ogunjobi offered some glimpses into just what he’s expected to bring to the table as a defender in the Steel City in 2022.

Making his Steelers debut last Saturday on the road against the Jacksonville Jaguars, Ogunjobi played 22 snaps with many of the Steelers’ projected starters on the field, outside of Cameron Heyward and third-year linebacker Alex Highsmith. In those 22 snaps, Ogunjobi showed what he can do as a run defender, but as a pass rusher he looked like he was simply trying to get his legs underneath him overall as he didn’t offer much there in that department.

That said, there was some snaps to like against the run, which is where he’ll have to make the biggest impact in 2022 in the black and gold.

Though he graded out at a 57.4 overall against the Jaguars (62.8 run, 51.8 pass rush), Ogunjobi’s tape was promising, especially for a guy who was taking his first real snaps since a serious Lisfranc injury in January that eventually resulted in him landing in Pittsburgh on a relatively cheap deal. There was certainly some things to like, others not to like, but it was a solid start for Ogunjobi in his tenure with the Steelers.

Let’s dive into the tape and look.

As I mentioned above, there wasn’t much there from a pass rush standpoint from Ogunjobi last week against the Jaguars. According to PFF, he had 14 pass rush snaps and just eight run defense snaps. While he didn’t generate any hurries, hits or pressures as a pass rusher, I’m not overly concerned because it appeared as though he was simply trying to get his legs underneath him, bang some pads and work his hands a bit.

As a run defender though, Ogunjobi was in the mix right away.

Here early in the first quarter against Jacksonville, the Jaguars attempt to run power to his side with right tackle Jawann Taylor down blocking against Ogunjobi. Though he gets moved off the spot initially creating a seam, Ogunjobi does a great job of anchoring, discarding Taylor and making the play in the hole, limiting running back Travis Etienne to a 5-yard play on a run that could have gone further without him fighting back across the block.

Later in the first quarter, Ogunjobi comes through with a similar play against the Jaguars, this time against right guard Brandon Scherff, who was the Jags’ big-name free agent addition this offseason.

The thing I like about Ogunjobi on this rep is his ability to find the football through traffic. He is able to peer around the blocker without losing ground and is then able to slip off and get into position to make the play. Though he takes a big hit in the process from running back Snoop Conner, it still goes down as a run stop for the Steelers’ interior defensive lineman.

At times on tape, you could tell Ogunjobi was a little rusty and slow to read with his eyes in certain situations.

This trap play by the Jags was one of those for the veteran defensive lineman.

He’s slow to read what Taylor is doing climbing vertically, and then tries to slip outside of the trapping tight end, effectively taking himself out of the play. As he gets more reps and gets back into the swing of things in the trenches, he’ll eventually sit there in that hole, take on the trapping tight end and clog up the lane for the running back.

On the same drive, Ogunjobi learned from his earlier mistake against the trap from the Jaguars and showed exactly how you’re supposed to play it.

Ogunjobi does a great job of slanting over into the hole, realizing what’s coming and settling down into the lane. He’s able to keep Scherff off of him with the extended inside arm, clogging the lane and waiting for help to arrive. By not taking himself up the field, he defends this perfectly and helps the Steelers record the stop at the line of scrimmage.

Overall, it was a solid start to his Steelers tenure, at least from a run defense perspective. Hopefully he’ll flash some pass rush prowess on Sunday against the Detroit Lions at Acrisure Stadium now that he has his feet under him and has that first game post-injury out of the way. He’ll be a huge key for the Steelers defense in 2022, considering he’s essentially replacing the Stephon Tuitt role up front.