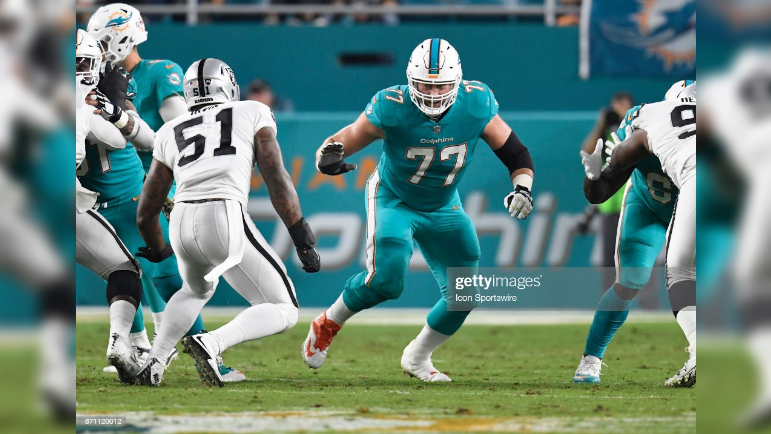 It wasn’t the move many were hoping for from the Pittsburgh Steelers in addressing the issues along the offensive line, but considering the circumstances and the cost of doing business, first-year GM Omar Khan did a decent job adding versatile depth and — most importantly — experience in a trade for 31-year-old offensive lineman Jesse Davis from the Minnesota Vikings.

Khan gave up just a 2025 seventh round conditional pick, which is about the cheapest thing a team could give up in a trade for a player. That might raise from red flags, considering the Vikings gave him away for essentially nothing without cutting him, but taking a further look at the tape Davis has some things to like – and things to not like — in his 72 career starts in the NFL.

Let’s start with the size first. Davis is 6-foot-6 and comes in around 309 pounds, according to Steelers.com. That makes him the second-largest offensive lineman on the roster, right behind right tackle Chukwuma Okorafor.

Outside of his size and experience, there are some concerns with Davis. He’s not the best athlete overall and has heavy feet, which is a tough thing to overcome at tackle. That said, he uses his hands well and is strong enough to latch on and control when he wins initially. He’s better suited inside for guard though where he’ll have help on both sides of him.

He profiles as a guard, and should step in right away as the top backup at guard. The Steelers are likely to have another tackle brought in in the next few days, whether that’s Trent Scott or Joe Haeg circling back with the black and gold, or with another outside free agent.

Let’s check out what Davis brings to the table though in the trenches.

While watching tape of Davis in 2021 and in the preseason this summer, it’s safe to say he’s not much of a run blocker despite his size and strength.

That could have been something the Dolphins were coaching, whereas that all changed once he went to Minnesota. Hard to tell, but it was glaring on tape.

Sometimes it works, like it did here against the Tennessee Titans last season on the road against outside linebacker Harold Landry. When in a stalemate, all you need to do is put yourself between the ball carrier and the defender, and that’s what Davis does. It opens a nice hole and leads to a big run. Still, you can see he’s not moving his feet in an effort to move Landry, which is a concern.

Later on the same drive, that stalemate technique came back to bite Davis.

He does a nice job getting off the ball and reached the Titans’ defensive lineman, but he doesn’t move his feet much and doesn’t turn him, which is required here. The defender does a great job gaining control of that outside shoulder, turning Davis and getting off the block to make the tackle at the line of scrimmage.

Similar thing here against the Las Vegas Raiders in the preseason, this time with Davis at right guard.

He does a good job getting square with the defender and getting latched on, but by going wide with his hands the defensive lineman gains inside control and has the leverage, stalling out with Davis right in the hole, resulting in no gain.

There are times throughout his film too, where he just doesn’t play with much strength or urgency in certain situations, leaning on guys resulting in ugly losses. In Minnesota’s last preseason game against the Denver Broncos, Davis had an ugly rep against a defensive tackle in a duo block.

You can see he has eyes inside to look for any free defender, but he does not have a good feel for what’s happening in front of him, allowing the defender to get into his chest and drive him into the hole before shedding him, resulting in a fumble. A guy his size should not be moved that easily into the hole and discarded.

That said, there were flashes of some good reps as a run blocker in Minnesota while playing left guard.

Liked this one a ton against Denver, working the duo before sliding off to get the free linebacker, taking him for a ride towards the sideline. Good job to move his feet and get an initial push, have good eyes to see the linebacker scraping over and then latch on and run those feet for the win.

Similar play here for the Vikings. Davis does a good job getting gaining control of the defensive lineman quickly, driving him off the ball with the help of the combo block, and then getting control quickly enough to let the center slide off to climb to the next level, keep himself between the ball carrier and the defender, leading to the explosive run.

As a run defender, there are concerns with Davis. Same in pass protection, though he’s a bit better there with his hand usage and ability to anchor and win.

The one real concern, outside of his foot speed and athleticism, as a pass protector is his eyes and awareness in dealing with stunts and twists inside. It was a real issue for him in Minnesota, though that could be due to some unfamiliarity with offensive linemen around him, as well as some of the calls.

That said, he was slow to pass off twists and stuns in the preseason and nearly gave up huge hits to his quarterbacks, especially against the Raiders.

He’s very quickly in recovery mode here against the Raiders as he allows the defensive tackle to cross his face and shoot inside on the pass rush, tying up the center and Davis, who is sideways to the line of scrimmage. Never a position one wants to be in as a blocker.

Davis picks up the free rusher late, getting a hand on him, but it could have been a disastrous play against a starting caliber defender.

In Miami at right tackle, there were ups and downs with Davis. I saw a lot of people saying his tape was really bad, but in the three games I watched (vs. Baltimore, at New Orleans, at Tennessee), I didn’t see too much to be concerned about. Is he a starter? No, he’s not better than Dan Moore Jr. or Okorafor, but he’s not a guy who isn’t rosterable.

He’s a serviceable veteran who is sound from a technique standpoint, is often in the right position and can get you by at the position. Considering what he went for via trade, that’s a win.

Here against Baltimore in 2021, Davis does a great job of sliding his feet after his initial quick set, getting in front of the inside speed rush from Tyus Bowser, getting his hands inside and controlling him from start to finish in the rep for the win.

I like the way Davis keeps his feet chopping and doesn’t flash his hands until Bowser shoots his. That allows Davis to get his hands underneath Bowser’s and into his chest, gaining control.

Same drive, Davis does a good job here handling the speed rush from Bowser around the edge.

He does a nice job again of keeping his feet chopping and flashing his hands late, sliding with Bowser to win the rep, keeping the young pass rusher from getting anywhere close to quarterback Jacoby Brissett.

This one against Baltimore’s Justin Houston last season was my favorite rep from Davis in pass protection. He has the independent hand usage that Steelers OL coach Pat Meyer is teaching, flashing his outside hand first for the initial punch to the chest, and then counters with his left hand back inside, stalling Houston in his pass rush for the win.

Overall, Davis is a solid depth piece for the Steelers to add, though he profiles much better at guard than at tackle in the Steelers system. He has 46 starts at left and right tackle in his career, with the other 26 career starts coming at guard. He’s flexible across the line and can step in at a moments notice at any of the four positions.

He’s just not a guy that is going to fix the issues up front for the Steelers. That said, it doesn’t hurt to add a guy with his experience and positional versatility to a relatively young offensive line under a new position coach.