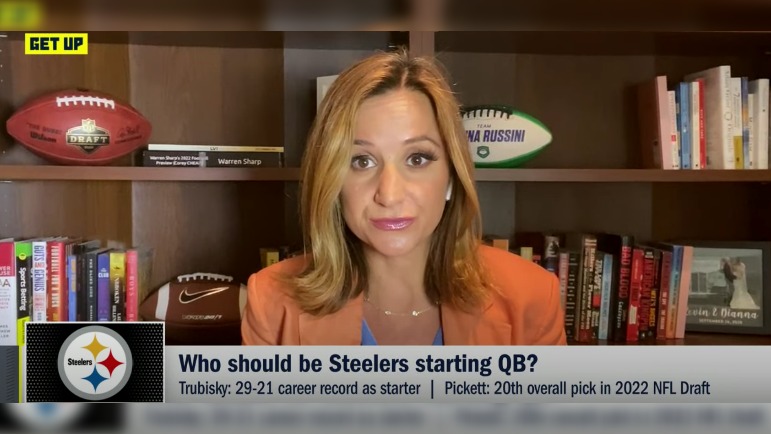 Time is winding down on the NFL preseason as teams enter the final week of exhibition play before the games count for their respective records. Franchises will have to make tough decisions on cuts, trades, and naming starters at various positions across their rosters. For the Pittsburgh Steelers, no position battle has become more prevalent than at QB, with Mitch Trubisky and Kenny Pickett seemingly in a two-man race for the finish line.

Mason Rudolph has performed well this preseason along with the other two names mentioned above, but he seemingly has been passed by Pickett on the depth chart who has enjoyed a strong preseason thus far. Still, despite all the forward momentum Pickett has picked up in recent days after a stellar showing against the Jacksonville Jaguars, ESPN reporter and insider Dianna Russini went on Get Up! this morning to share news that she gathered from a source stating that the competition is all but settled.

“But I was told last night when I had a conversation with a Steelers source, that this is Mitchell Trubisky’s job to lose,” Russini said on Get Up! which aired on NFL on ESPN’s YouTube page. “Meaning Mitchell Trubisky is the starter, and essentially if he just makes major mistakes or he just winds up making some major mistakes, that’s when we could see the rookie step in. But for now, this is Mitchell’s job.”

Trubisky was named the starting QB the second he signed with a team as a free agent in the spring, running as the first-string QB throughout OTAs, mandatory minicamp, training camp, and in Pittsburgh’s two preseason games. Trubisky is the more experienced option while Pickett has shined in his limited preseason exposure to-date, facing top-tier defenses in the regular season may present more of a formidable challenge.

Jeff Saturday, who also appeared on the show, mentioned that Trubisky’s mobility behind a bad offensive line should be considered when deciding which QB to roll out there Week 1 against the Cincinnati Bengals. While Pickett is fairly mobile, it’s reasonable to suggest that Trubisky is superior in that facet of the game, being able to create more off-script when the protection breaks down. The big issue many have had with Pickett starting is the play up front by an offensive line that hasn’t played well thus far this preseason, suggesting Pickett could be in for a tough time against the opposing pass rush if the unit doesn’t work out some of the kinks prior to the start of the regular season.

While Russini mentioned that Pickett has done nothing wrong in this process and has made himself a candidate to start, Pittsburgh prefers to slow-track him in seeing the field, allowing Trubisky to serve as that bridge QB that they went out and brought in on the first day of free agency.

“Look, the Steelers are really pleased with their rookie quarterback in Kenny Pickett with not just what he’s doing on the field but with his intelligence in the meeting room,” Russini continued. “But look, they made an investment in Mitchell Trubisky. The want this to work and I did have a conversation with someone in Pittsburgh last night who said, ‘Here’s the best part about this: competition breeds success’, and when you got a good QB competition, everyone is just playing better.”