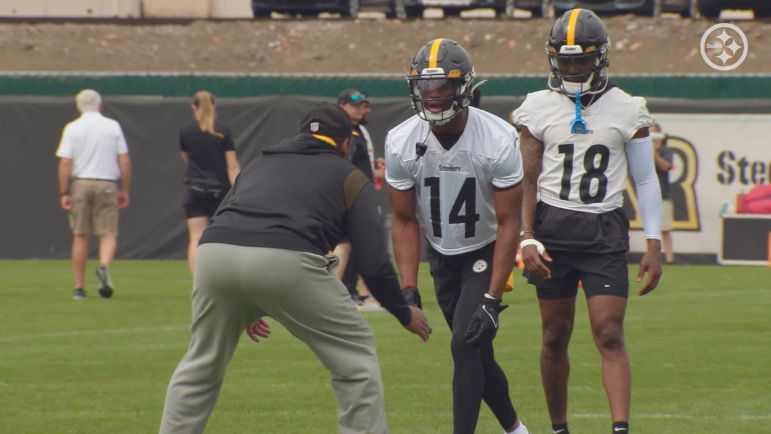 Pittsburgh Steelers rookie wide receiver George Pickens has already taken the NFL world by storm. He’s become such a sensation that the league’s official Twitter account even adopted a meme of Pickens as its banner, featuring the now-famous still of the receiver watching himself get drafted, but now altered to watching himself catching his first touchdown pass.

Anybody who watches him and knows what they’re seeing, whether it’s in a stadium or on the practice field, is likely to come away impressed. Even if it’s another wide receiver who has already risen to the level of Pro Bowler in the NFL, such as his own teammate, Diontae Johnson, who is taking it upon himself to help Pickens flourish.

“He’s a freak, that’s what he is. He’s a freak”, he told reporters yesterday, via 93.7 The Fan. “That’s a special talent. You can’t teach some of the things he do. I’ll just be watching him like, ‘Man’. I’ll be amazed how he catches the ball sometimes”.

Those who have had the luxury to attend training camp, or who have at least seen a short video or two of him on the grass of Chuck Noll Field, already knew what he was capable of, but the rook successfully transported that performance into the stadium on Saturday night with a couple of impressive catches, including his 26-yard touchdown at the back right corner of the end zone.

Still, he’s a rookie. He’s learning. But he’s in the right place to grow, both on and off the field, with the likes of head coach Mike Tomlin and wide receivers coach Frisman Jackson providing structure, and having accomplished peers willing to help.

“He’s just young. He’s getting better on the daily. I’m teaching him certain stuff, and if he asks questions, I’m always there for him”, Johnson said.

“Showing him what it’s like to be an NFL receiver when it comes to certain stuff, what you’re doing mid-route or off the ball, whether that’s like extending and getting an OPI”, he explained. “Little stuff like that can go a long way just by me telling him what not to do. I’m sure he knows what to do. I’m just there to teach him little stuff”.

Pickens and Johnson will be teammates for at least the next three seasons after the latter signed a two-year extension during training camp. Johnson recorded over 100 catches for over 1,000 yards last season, and earned himself a trip to the Pro Bowl in the process.

He is widely and rightly regarded as one of the most polished route runners in the game, and has demonstrated a tireless work ethic during the offseason. People will have their opinions about him as a player and his perceived shortcomings, but I won’t be convinced that he doesn’t have some valuable things he can pass on to the Georgia product.