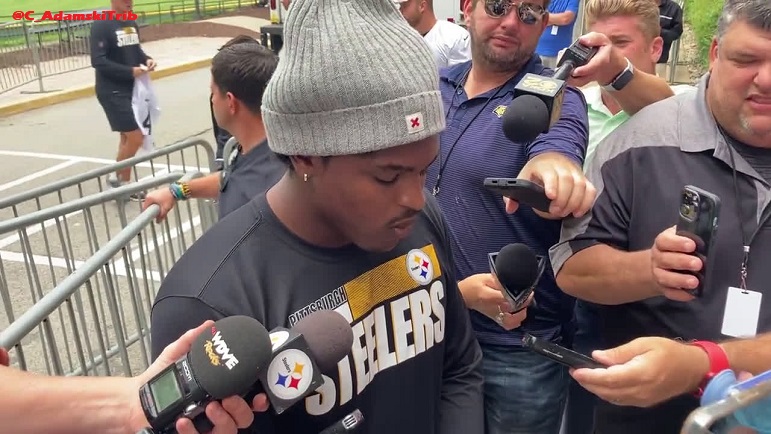 Following Pittsburgh’s 32-25 win Saturday night against the Seattle Seahawks, there were plenty of performances that were noteworthy in terms of players showing improvement from the past season or in their first exposure to the NFL. One player that seemed to struggle in the exhibition game was LB Devin Bush, who again appeared pensive out on the field, looking slow in terms of diagnosing the play and coming downhill with a reckless abandonment that he showed at times as a rookie back in 2019 and to start 2020 before he suffered a torn ACL.

Prior to practice Tuesday, Bush was asked by the media about his previous knee injury and if that still is potentially affecting his play.

“I think that’s behind me now,” Bush said to the media before practice according to video provided by Pittsburgh Tribune-Review’s Chris Adamski’s Twitter page. “I think now, it’s getting accustomed to the new DC we got. We got obviously Brian Flores and so he got some new idea. So, I think it’s more adjusting to him and being able to understand what they want out of me.”

According to Bush, the knee Injury is a thing of the past as it should be given the fact that he is almost two years removed from the injury taking place. However, Bush points to getting comfortable with new DC Teryl Austin and the potential changes he has implemented in Pittsburgh’s defensive system as a potential hurdle he must get over to feel comfortable playing his position.

It doesn’t sound like Bush is trying to make excuses in his statement, as a change in defensive coordinators can result in some tweaks in scheme and responsibilities, even if Austin was in-house last season. Still, while Bush acknowledges that he is trying to best understand Austin and Flores’ expectations of him and his role in the defense, this shouldn’t be seen as a pass for the performance we saw on Saturday night.

The Devin Bush we saw against the Seahawks more resembled the one we saw in 2021 post-ACL surgery rather than the Bush we knew before the injury occurred. At this point in the recovery process, Bush needs to be closer to his pre-injury self to play a big role in Pittsburgh’s defense in 2022. If he can’t get over that hump and plays the same way he did last season, fellow LB Robert Spillane will undoubtedly be entrusted with more work as he already has this preseason, often splitting first team reps with the former first-round pick.