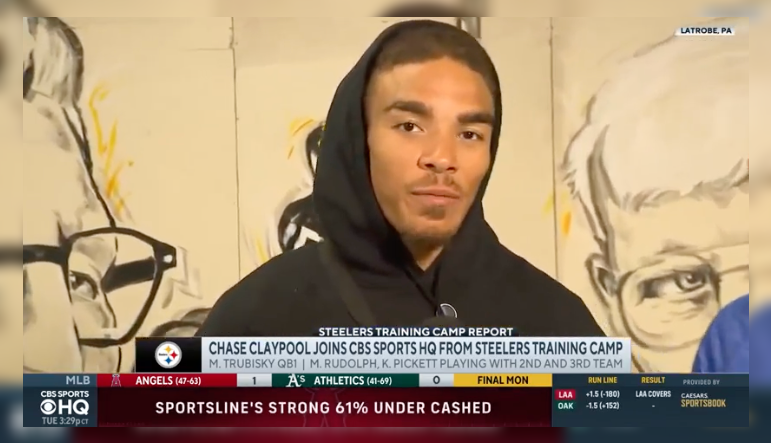 An offense featuring a number of new faces under second-year coordinator Matt Canada could have the Pittsburgh Steelers lighting up scoreboards in 2022, at least in the eyes of third-year receiver Chase Claypool.

On paper it’s a solid group of playmakers, but the offensive line and the play under center in the post-Ben Roethlisberger era remains a significant question entering the 2022 season with Trubisky and Pickett competing with the incumbent Mason Rudolph for the starting job Sept. 11 on the road against the Cincinnati Bengals.

Though there are plenty of questions and a long way to go for the Steelers offense, Claypool believes the offense has the ability to be the best in the country, he told CBS Sports HQ.

“Yeah, I think we can be the best offense in the country. As long as we do all the right things,” Claypool said to Jones and McFadden, according to video via the CBS Sports HQ YouTube page. “We gotta stay healthy and we gotta execute plays, but I think there is no ceiling for us and I know a lot of people are gonna get on my head for that. But, you know, I believe that, as I should.”

Claypool has said some outlandish things this offseason that have certainly raised eyebrows, and there’s nothing much different with his latest statement. While the Steelers have a tremendous group of playmakers at receiver, tight end and running back, the question marks on the offensive line and under center are far too great.

Add in the uncertainty of Canada and his ability to gameplay and call a game in the NFL, it’s a major stretch to believe the Steelers can be the best offense in the NFL, like Claypool says.

Of course, with the talent at the skill positions, the Steelers could certainly make a sizable leap in 2022 as an offense, especially with the fits of Trubisky and Pickett in Canada’s scheme compared to Roethlisberger’s in 2021. Doing the little things right, staying ahead of the chains and capitalizing on opportunities that present themselves will help the Steelers take the next step offensively. The best offense in the NFL is a bit out of reach though, at least right now.