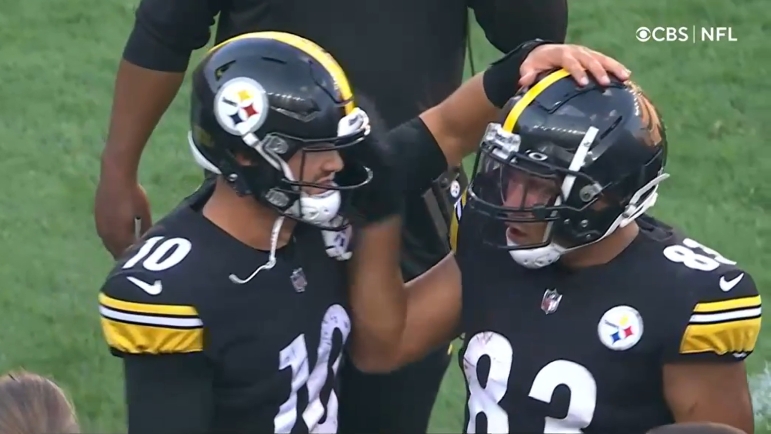 You may (or may not) have noticed that the Pittsburgh used rookie Connor Heyward in the backfield on occasion during their preseason finale on Sunday. While that is certainly not a surprise given the diversity of roles that had been discussed for him as soon as he was drafted, it is significant in that it was the first time that they put that out in-stadium. Indeed, they had only begun to get him out of squarely the tight end role this past week.

As should be expected, offensive coordinator Matt Canada discussed that development and the ongoing process of bringing the rookie along while keeping him at a level of understanding that will allow him to play without thinking too much.

“That position for us is an F. Whether it’s in the backfield or on the wing, we kind of use that guy interchangeably”, he said of the role Heyward is being asked to do, via the team’s website. “There’s a balance of how much we can give him where he can play fast and know what he’s doing”.

This is a very common method of development for rookie players who are expected to be position-flexible, something that we have seen most recently just last year with seventh-round defensive back Tre Norwood. Head coach Mike Tomlin referred to him as a Swiss Army knife when he personally announced the selection, yet it wasn’t until mid-August that he started playing outside of just the safety spot.

For Heyward, he had spent all of his time up until this past week working pretty much single-mindedly with the tight ends under Alfredo Roberts, but it had long been discussed that that would evolve. That process is now in the second stage, expanding his assignments into the backfield, and continues to be ongoing.

“Everything’s on the table for him, but where you see him will be more based upon what everybody else is doing around him as he continues to grow”, Canada said of his potential future usage. “I think we could see him being more multiple, but I think we’ve got to be fair to him and us”.

In consideration of the fact that the Steelers already have two tight ends in Pat Freiermuth and Zach Gentry whom they like very much, it would not be unreasonable to assume that the rookie is more likely to see the field the more he shows that he can play out of the backfield. That he’s only six feet tall is another factor. But they continue to like what they see.

“We’ll just continue to bring Connor along. As far as his talent level, I’m a huge fan of his talent, what he can bring to us, the different options he gives us”, Canada said. But will he see the field on offense any time soon? Or is he Danny Smith’s charge for now? I would strongly anticipate the latter.