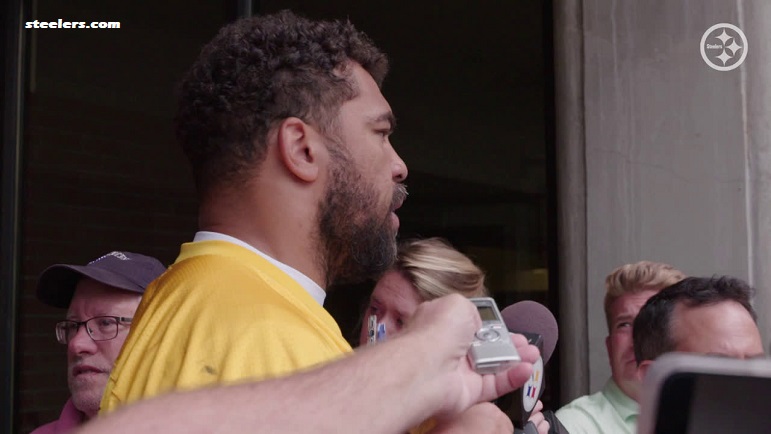 Under the microscope coming off of a disastrous 2021 season, fourth-year linebacker Devin Bush has a lot riding on his shoulders ahead of the 2022 season for the Pittsburgh Steelers as a key part of a potentially dominant defense in the black and gold.

So far, Bush hasn’t helped himself out much from being under the microscope and facing criticism. His play in Saturday’s preseason opener at Acrisure Stadium against the Seattle Seahawks left much to be desired, and then his comments on Tuesday prior to practice sounded a bit tone deaf and out of touch with his play on the field.

He’s still a young player who is trying to find his game again coming off of a devastating knee injury early in his second season. Still, it’s put up or shut up time for the former No. 10 overall pick in the 2019 NFL Draft that the Steelers traded up to land. So far, he hasn’t put up much on the field, but defensive captain Cameron Heyward came to Bush’s defense on Tuesday prior to practice at Saint Vincent College in Latrobe, stating to reporters that Bush has the right mindset on the field in training camp, and that he likes where Bush is at from the mental side of the game, especially coming out of Saturday’s preseason opener.

That doesn’t sound as promising as it should for a fourth-year player, but it’s at least a positive for a player that’s dealt with a lot of criticism in the last year or so.

“I think for a guy like Devin, obviously he didn’t have the year he wanted, but you know, he is coming in with the right mindset,” Heyward said to reporters Tuesday, according to video via Steelers.com. “He’s running. He seems like he’s a lot more confident in what he’s doing out there, and that’s just the growth in the defense as well.

“…the thing I loved about what Devin did in the last game that didn’t get a lot of credit for, he moved around the ball,” Heyward added. “He was able to stem on the line before the play was actually snapped. That let us know…he really understands the defense. He understands what the quarterback’s thinking, and those are the things you look for in a third- or fourth-year guy. Devin’s gonna grow physically, but I think the mental part of the game is just gonna exceed itself as well.”

Again, those comments from Heyward aren’t as promising as they really should be, considering where Bush was at mentally and physically last year, but at least they are some positives. Now, he needs to show it in game-like settings.

He can talk all he wants about how he feels good coming off the knee injury and how he feels confident mentally in his role in the defense. Talk is cheap though, and that’s all its been so far from Bush, especially in recent days. He can be as comfortable in the scheme as he wants to be; it’s great that he’s growing mentally within the scheme. But he has to start making plays to not only warrant a spot in the starting lineup, but on the Steelers’ 53-man roster overall.