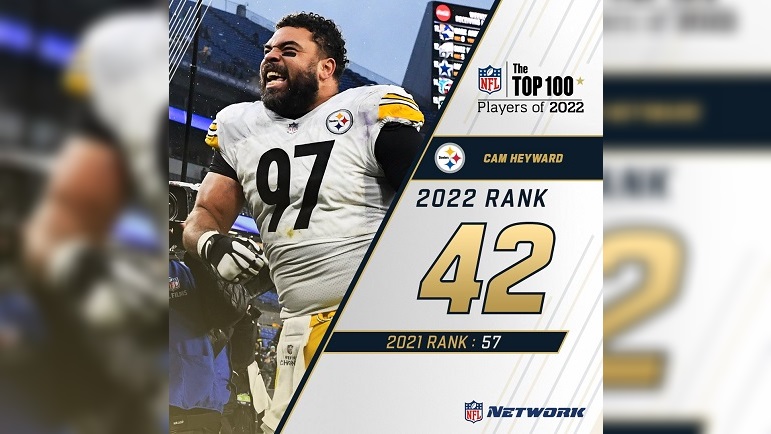 Cam Heyward is the first Pittsburgh Steeler to crack the NFL’s annual Top 100 list, ranking 42nd overall on this year’s list. That’s an improvement over 2021, where he finished 57th.

Despite poor front seven play overall, Heyward had arguably the best season of his career, a one-man wrecking crew making up for the losses of Stephon Tuitt and Tyson Alualu. Starting in all 17 games and playing over 80% of the defense’s snaps, Heyward finished 2021 with a career-high 89 tackles to go along with ten sacks and nine pass deflections. It marked the second time in his career he cracked double-digit sacks.

Heyward is one of the game’s elite interior defenders with one of the best bull rushes/long-arms in the game. He’s consistent, plays with unbelievable effort, and has seemingly only improved into his 30s. He’s a leader and face of the franchise, the true meaning of a Pittsburgh Steeler on and off the field.

His 42nd overall ranking is the highest of his career. His previous high came in 2018 when he ranked 48th overall. While making the top 50 is impressive, Heyward should arguably be a couple rungs higher as the second-best interior defensive lineman in football, only trailing Aaron Donald. This marks Heyward’s fifth straight year on this list.

T.J. Watt is sure to finish high on this list, and might be the only other Steeler on it. Minkah Fitzpatrick may be left off this list, a surprise for one of the game’s best free safeties who placed 52nd a year ago.