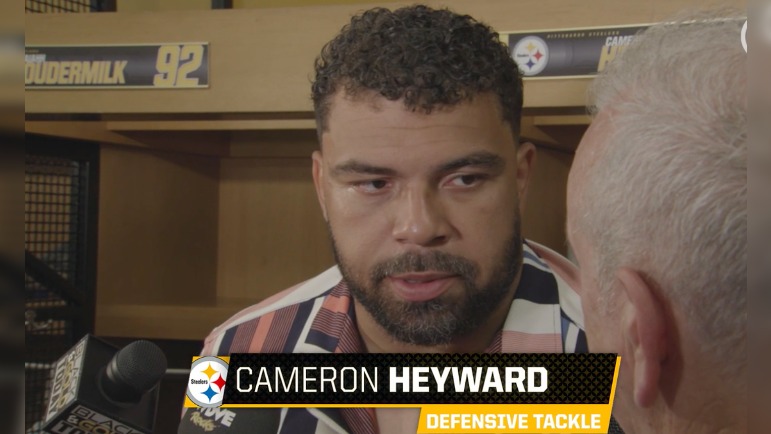 Following the game Sunday evening with the Pittsburgh Steelers won 19-9 against the Detroit Lions in the final week of preseason play, DL Cam Heyward was interviewed in the locker room by the media, asking him about his preseason experience and the state of the defense as they transition from preseason action to regular season play.

When asked about how Heyward would evaluate the defense through three preseason games and the overall quality of their run defense, Heyward mentioned that he has seen improvement, but one play in-particular sticks out like a sore thumb in Pittsburgh’s efforts against the Lions.

“I thought we did okay in the run,” Heyward said in the locker room to the media following the game on video from Steelers.com. “There was one play I was pretty pissed about just because it’s give up football third-and-long, got to be ready for the draw, and we gave up a first down on that. Other than that, I thought we played pretty stout upfront. Guys were filling gaps, but it’s something we can improve on.”

The play that Heyward was referring to was a 3rd and 17 conversion picked up by Lions RB Jermar Jefferson on and inside draw play where the defense parted like the Red Sea, springing him wild into the secondary where he would weave his way through the defense to pick up the first down.

Not a problem for Jermar Jefferson. @Lions

In the play above, you see a big hole open in the middle of the offensive line as Heyward and Chris Wormley lose gap integrity, allowing Jefferson into the second level where Devin Bush is unable to get off a block by T.J. Hockenson, thus giving Jefferson the angle to bounce the run toward the right sideline and move the sticks on third-and-long.

The run defense has been under scrutiny since last season where they finished dead last in the league in rushing yards allowed and yards per carry. The team has gone about adding to the defensive front by bringing in Larry Ogunjobi, DeMarvin Leal, and Myles Jack while returning Tyson Alualu from injury last season to hopefully beef you the run defense in 2022. Like Heyward said, it was only one play, but he is right for allowing that one play to leave a sour taste in his month based off what happened to the defense last season against the run.

Hopefully, this was just a fluke and Pittsburgh can shake this bad play off and be a more consistent unit this season compared to the one that took the field last year. They will get a difficult task next time they suit up in Week 1 against Cincinnati Bengals RB Joe Mixon and an improved offensive line.