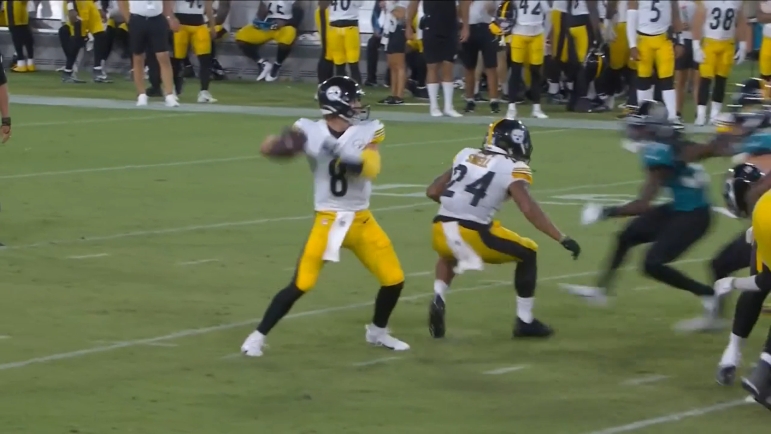 Outside of the merits of drafting a fourth quarterback in the seventh round while preparing for a three-quarterback competition, or releasing a marginal journeyman edge rusher who looked slightly better in one preseason game than the other journeyman backups, the biggest debate in Pittsburgh lately has been how to determine when to start a rookie quarterback.

Do you just watch him play and know whether or not he’s ready to start? And does he start as soon as he’s ready to start, or does it still hinge upon other factors, such as the state of the offensive line, and the locker room intricacies involved in making lineup changes? For Bucky Brooks, all that gets set aside.

“Kenny Pickett came in and the game was not too big for him. The ball came out quickly. He was decisive. He did a good job of standing in the pocket. He took a shot in his face and teardropped it. This dude has it”, he said on the Move the Sticks program with Daniel Jeremiah.

“Watching him in Pittsburgh, I don’t know how you can not start him, because the offense flows with him”, he added, “and if it’s close between a young guy and a veteran, you’ve always got to go with the young guy. Let’s get the clock started”.

The veteran, of course, is Mitch Trubisky, whom we have heard from numerous outside reporters will be the starter on opening day, even as head coach Mike Tomlin insists that no decision has been made and that it is one of the starting jobs that remains in contention heading into the final preseason game.

A first-round draft pick out of Pitt, Pickett is the quarterback the Steelers identified during this draft process as the heir apparent to Ben Roethlisberger, who retired after 18 seasons earlier this year. His future as a starter is only a question of when, not if.

“This guy has a chance, man. I don’t want to overblow it, but this guy has a chance to be special in this offense, because it just moves and operates differently when he’s at the helm”, Brooks said. Still, while Jeremiah agreed with his observations, he pumped the brakes when it comes to judging what the team will actually do in reality versus what they would do or would do if they were in charge.

“I think he’s gonna start for the Pittsburgh Steelers for a decade-plus. What I don’t agree with, though, is that he’s got the job and that the contest is over”, he said. “I think this is Mitchell Trubisky trotting out there Week 1. I think they’re gonna let Trubisky roll for a little bit and they’re gonna ease Kenny Pickett in”.

As you would expect, he then went on to talk about the state of the offensive line, which has been offensive through two games. We can say that the Steelers’ quarterbacks have fared as well as they have in spite of the play of their offensive lines, and not because of them.

Will the state of the offensive line, as it works its way through the growing pains of lineup and coaching staff changes, cause Tomlin to hesitate to put his rookie in? How big of a factor is that? And what are we failing to consider more?

What happens if he starts Week 1 and then in Week 4 he gets blown out because, by then, defenses know how to exploit him? Can he not benefit by going through the process of weekly gameplanning first as a spectator before he is required to be in the game? The answer to that is, of course, yes, but can he overcome that learning curve by playing now and still have sustained success? Well, we don’t know.