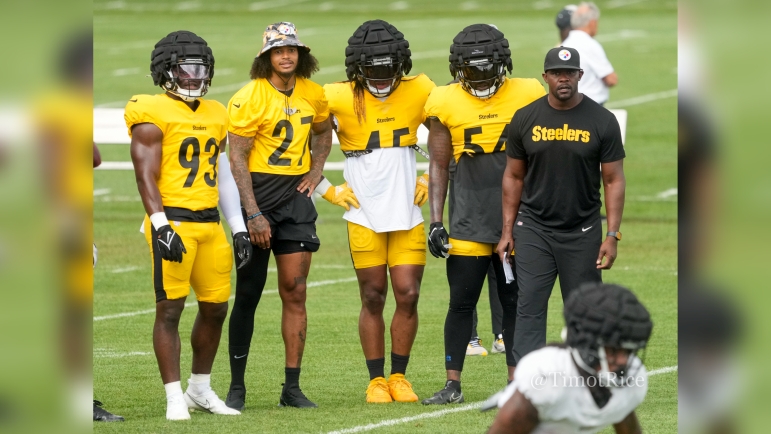 Even though he was quick to downplay any significance to be read in it, Pittsburgh Steelers head coach Mike Tomlin actively made the decision to list Robert Spillane and Devin Bush as co-starters at one inside linebacker position.

That’s not something that you just decide to do randomly for the giggles without there being some real-life context behind it. Yet the team has been active in exploring all of its options. Last week, Myles Jack was used as the sole linebacker in dime packages, yet this week, Bush has been getting a run in that role.

With all the mixing and matching going on, there is a slightly unsettled air at the inside linebacker position. Asked if it was bad to be working with what was effective co-starters at this point in the process, linebackers coach Brian Flores didn’t think so. “No, I think it’s always good”, he said on 93.7 The Fan. “As many good players as we can have, that’s what we’re looking for”.

Despite the co-start billing, there was no ambiguity what the pecking order was in the season opener. Bush and Jack started, and Spillane came into the game after them. Yet he has been spelling either one of them at various times with the ones during practice, and he has been making plays.

What will the arrangement look like a few weeks from now when the Steelers actually have a game to play? Flores has said that he likes where Bush is, yet he has also made comments that hinted at certain fundamental issues that they are still working through with the former top-10 draft pick.

Going into his fourth season, it’s a struggle to perceive such issues as correctable at this point—indeed, large swaths of the fanbase have more than given up on him at this point, and many also feel that he may have already checked out as far as any specific desire to remain in Pittsburgh goes, perhaps already eying 2023 for free agency.

Confident that he would be playing for somebody next year, Bush does first have to get through the current season, and if he has any aspirations of earning himself a starting job with a contract that in any way reflects such a status, he’s going to have to have his best season yet.

As for Spillane, he, too, will be an unrestricted free agent next year. The former undrafted player out of Western Michigan has a tireless work ethic that he brings to his craft, but the Steelers have passed up opportunities to put him in the starting lineup before, even if they have continued to provide him avenues toward playing time.

Beyond the trio, the team is also looking at a pair of younger players, last year’s fourth-round pick, Buddy Johnson, as well as rookie Mark Robinson. Marcus Allen has been out injured for a while now, while Ulysees Gilbert III was received waived with an injury designation and reverted to the Reserve/Injured List.