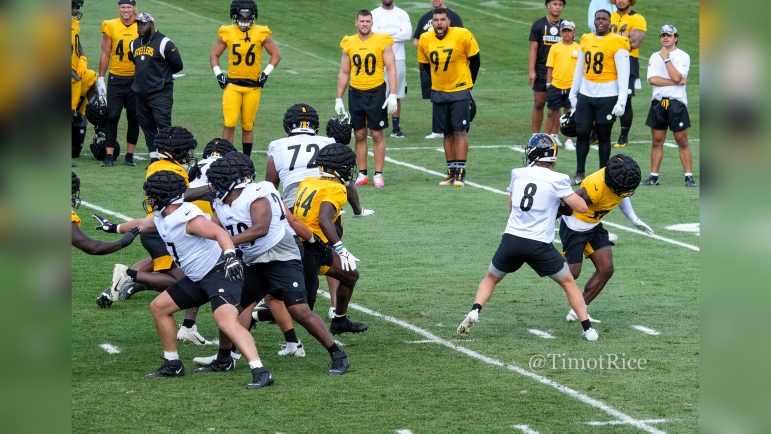 For a Steelers defense undergoing a makeover of sorts and infusing some new talent in across the board, one constant that looks to remain the same is playing a physical brand of football. One new face on the coaching spectrum on that side of the ball is Senior Defensive Assistant Brian Flores, formerly the head coach of the Dolphins and before that, Bill Belichick’s Defensive Coordinator with the Patriots.

While with the Dolphins, his defensive acumen definitely carried over, as the team relied on a hard-nosed defensive approach to lead the league in turnovers forced in the 2020 season with 29, and also tied for eighth last season with 26. Earlier today when speaking with Steelers team reporter Mike Prisuta, Flores relayed how it’s vital to have that same tenacity and aggressiveness out of his current unit, especially when blitzing.

“You always want to be aggressive and you always want to have a physical front and always want to pressure the quarterback,” Flores told Prisuta via Steelers.com and iHeart Radio. “I think there’s a time and a place for any defense. But blitzing is part of what the Steelers do, there’s no doubt about that. I think we all know that it’s something that the offense has to prepare for.”

The blitz rate of the team last year was only 26.1%, down drastically from the past several seasons. In fact, it was the lowest it’s been since 2014, which was the final time we saw Hall of Famer Dick LeBeau on the sidelines as DC.

Last season after starting 1-7, Flores’ Dolphins decided to dial up the blitz rates, and the defense rose to the occasion, helping the team almost make the playoffs with a 9-8 record. The team ranked second in the league in both total number of blitzes and also blitz percentages, only behind Tampa Bay. Flores routinely liked to send defensive backs on blitzes, but the team was also equally adept at getting home with its front four.

For a defense like the one currently residing in the Steel City, Flores hopefully will be able to ramp up the blitz numbers, which for the rest of the league should be a scary thought, considering the team has led the NFL in sacks for the last five seasons. Getting the blitz rate out of the 20’s and back into the 30’s or 40’s will definitely put some of the bite back into “Blitzburgh” and a defense that, on paper, looks to be amongst the top units in the league.

“I feel like I have something to offer, but there’s plenty that I’ve learned as well. So I’m excited about working with this group of players and doing whatever I can to help us, help this team win.”