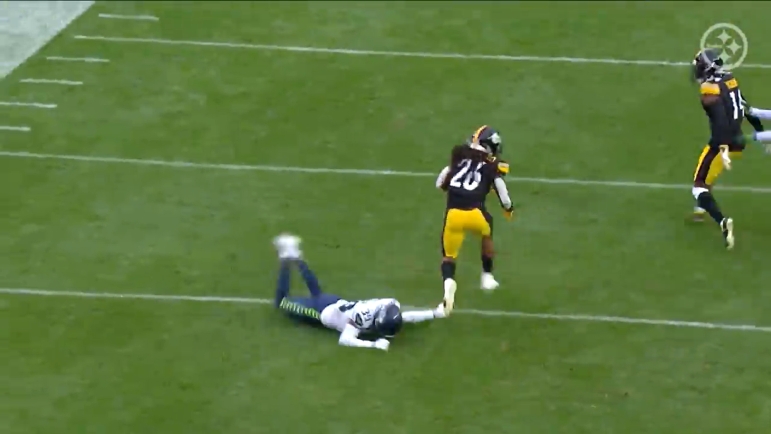 With both Najee Harris and Benny Snell Jr. on the sidelines for last night’s game, third-year running back Anthony McFarland Jr. got the opportunity to start for the Pittsburgh Steelers, running with their first-team offense alongside quarterback Mitch Trubisky.

He put forth the best effort of his career yet, rushing for 56 yards on seven attempts, including a 24-yard run that went for a third-down conversion, showing success in situational football. He also got a couple of cracks at returning kicks. Overall, it was a positive impression as he fights for a roster spot.

“It was a good feeling. Anytime you go with the ones you want to display everything what I’ve been working on in the offseason and then in camp”, the former Maryland product said of his outing in the Acrisure Stadium inauguration, via the team’s website. “I study my game a lot, and I feel like, I’ve got to keep improving, but I’ve made some jumps from coming into the offseason and into camp”.

A fourth-round draft pick in 2020, McFarland has struggled to find a role, let alone a rhythm, in the Steelers’ offense. He was behind James Conner as a rookie, and Najee Harris conglomerated the playing time at running back last season.

It didn’t do him any favors that an injury kept him on the Reserve/Injured List for a good chunk of the 2021 season, and by the time he got back healthy, he was more or less out of the mix, spending more games as a healthy scratch than with helmet in hand.

While Harris at the top of the depth chart is a given, it is largely assumed that Snell will also merit a roster spot, though I think there is at least some conversation that can be had about that. Certainly, there is room for a change in the depth chart with a possible new number two.

Still, McFarland is competing not only for a role, but also a roster spot. He is being challenged by a trio of rookie college free agents, all of whom have shown a proclivity for one aspect of the game or another, particularly Jaylen Warren. The newest of the group, Master Teague III, helped close out last night’s game with some very physical carries.

The fact that the four running backs combined for 125 rushing yards on just 19 carries is also a tribute to the growth of the offensive line, especially given that neither of their top two running backs were available. Wide receiver Steven Sims also took a direct handoff 38 yards, and quarterback Kenny Pickett contributed 16 yards on three scrambles.

In all, the Steelers recorded 185 yards on the ground on 27 carries, averaging 6.9 yards per carry, but it was McFarland headlining the night with the most impressive showing of his career, a continuation of the work he has shown in training camp, furthering the perception that he is putting it all together this year and is ready to be an active contributor to the offense.