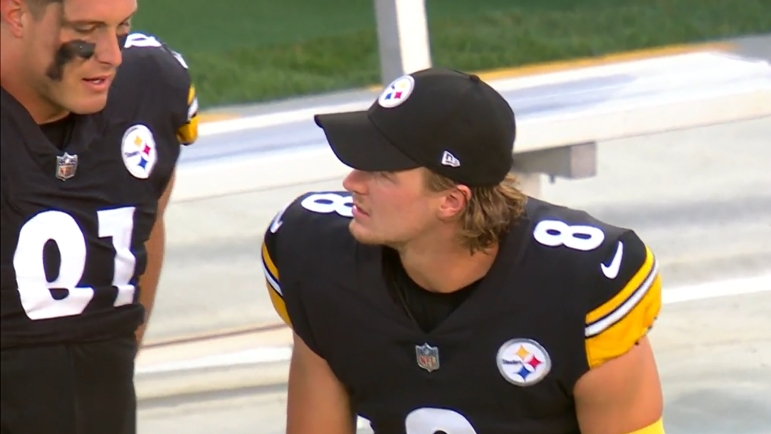 It wasn’t as impressive as he two previous showings in the preseason, but Pittsburgh Steelers rookie quarterback Kenny Pickett went out on another high note in the preseason finale Sunday at Acrisure Stadium against the Detroit Lions.

Once again emerging to chants of “Kenny! Kenny! Kenny!” Pickett looked strong again, completing 10-of-14 passes on the afternoon for 90 yards and led one scoring drive and should have had another despite a blocked field goal.

Out of the game in the fourth quarter giving way to Mason Rudolph, Pickett was seen on the bench at Acrisure Stadium next to quarterback Mitch Trubisky on the headset with the veteran, presumably talking to second-year offensive coordinator Matt Canada in the booth, helping relay what they had both seen on the field to the coaching box, which could then get that information back to Rudolph on the field in hopes of helping the veteran quarterback succeed much like they had on the afternoon.

Alas, it didn’t quite work as the Steelers ran just five offensive plays with Rudolph before a punt, ending the day offensively.

Still, that collaboration on the sideline and the willingness to help each other out will be the lasting impression from the three-man quarterback competition that transpired all offseason through OTAs, minicamp, training camp and preseason. That’s a testament to the relationships developed in the room, according to Pickett, who spoke to reporters after the game.

“We were just both bouncing ideas off of each other, what we saw when we were out there, what we think was working,” Pickett said to reporters, according to video via Steelers Live on Twitter.  “So, you know, when Mason’s in there, we can relay the same stuff. But we have a great relationship, the whole quarterback room as a whole. We have a great relationship where we can talk and talk out ideas and what we see, what we don’t like.

“I think it was a really good preseason for us.”

It definitely was a good preseason for the quarterback room as all three played rather well in their limited reps on the field in game-like situations. Though Rudolph was left to record just five reps on Sunday evening against the Lions, there’s nothing to hang his head about. He performed admirably in the reps he received throughout the summer on into training camp and preseason action and really made it a three-way battle with Trubisky and Pickett.

Now, moving forward with Pickett very clearly entrenched as the No. 2 behind Trubiksy — assuming that is the pecking order for the regular season — those great relationships in the quarterback room will have to be strengthened as the games start to count and the pressure is ratcheted up significantly.

So far, it’s worked well, but with Pickett breathing down his neck, Trubisky might need to lean on that second set of eyes from field level a bit more, putting any sort of ego aside and being open to all the help he can get in an effort to stay on the field and hold off the rookie. There shouldn’t be any worry from inside the locker room and the facility based on how the room has functioned together so far.