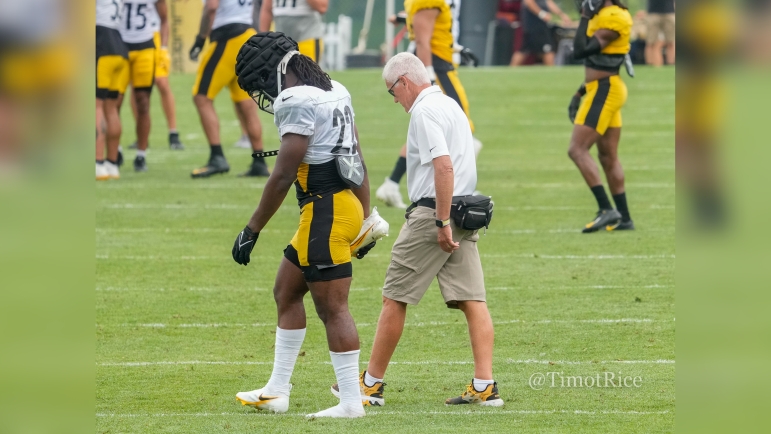 Question: Who will take advantage of whatever practice time Najee Harris might miss due to a minor foot injury?

Head coach Mike Tomlin confirmed after practice yesterday that running back Najee Harris had his foot stepped on, which led to him exiting the field and being done for the day. Given that we are only in the second week of training camp, there’s an excellent chance the coaching staff will be highly conservative when it comes to bringing him back onto the field.

Assuming that he misses at least a day or two of practice, who is going to step up and use those extra reps to their advantage? While Benny Snell Jr. is the runaway favorite to be the number two back this year, the rest of the backfield is a mystery, with third-year Anthony McFarland and rookie college free agents Jaylen Warren and Mataeo Durant trying to catch some eyes.

The team recently brought in veteran Jeremy McNichols just as training camp opened, but he too also reportedly suffered a minor injury, which could potentially keep him off the field for at least a day or two.

The coaches talked back in May about how they want to figure out how to give Harris more rest during the season, but that requires identifying somebody they trust can step up when their Pro Bowler is not on the field.

Fan confidence in the Steelers finding such a player on the 90-man roster certainly appears to be low, as we often hear it said that they need to bring in a veteran running back. I certainly wouldn’t be opposed to the idea. But if Harris misses some time, it would be the ideal opportunity for the in-house candidates to state their case.