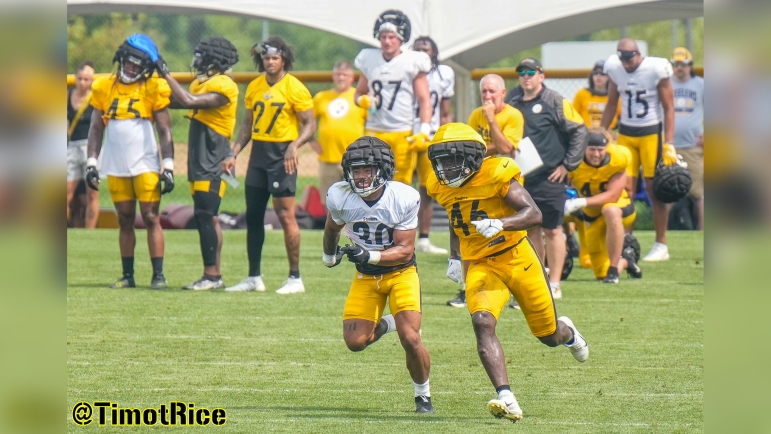 Reasoning: Although the rookie college free agent is not coming off of his best practice—he fumbled and dropped a pass the last time we saw him on the field, but the team did presumably have a closed practice last night due to inclement weather—Warren has opened some eyes during the first two weeks of training camp as he tries to make the battle for the third running back spot a competitive one.

If there is one position more than others, outside of the specialists, where a college free agent is most likely to be able to stick right away, it’s the running back position. A lot of what makes a running back good largely comes naturally, such as having the vision to see where the holes are to run through. And so much of the job is reliant upon the blocking, as it is.

It’s no surprise, then, to see somebody like Jaylen Warren being able to stick out among the group of rookie college free agents the Steelers signed this year after the 2022 NFL Draft. He has displayed the sort of toughness and energy that you want to see from a player in his position, trying to make the team.

As mentioned above, at least from the last practice that we were able to see, he is not coming off of his best day, but the evaluation process is as much about how you respond to adversity as it is just about anything else. Because nobody is going to go an entire career without encountering some type of personal performative adversity.

Warren will have the chance to do that, at least as far as our eyes are concerned, later today, and I think a lot of people will be curious about that. Fans are very hopeful to see a competitive battle for the running back spots behind Najee Harris. Even if we take Benny Snell Jr.’s spot as a given, the number three spot that was nominally Anthony McFarland Jr.’s last year should be up for grabs, and the rookie is one of the players making that happen.