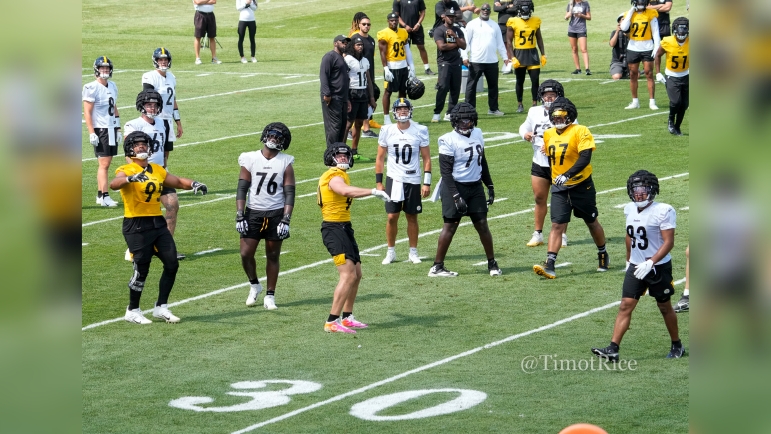 Reasoning: Six practices into training camp, veteran quarterback Mitch Trubisky has taken only first-team reps, but hasn’t looked like a first-team quarterback that any Super Bowl-caliber team should have.

Sometimes I feel obliged to preface these things with the caveat that these stock evaluations aren’t always supposed to mean a great deal, that a ‘stock down’ doesn’t mean somebody is horrible and is going to remain horrible forever.

I include that preface now while discussing the first five practices for Mitch Trubisky in training camp for the Steelers, during which he frankly has not looked very good, from all reports. In fact, he frequently goes 0-for during his situational reps, all with the first-team offense, and it’s becoming hard to ignore.

That’s a lot of firepower that isn’t out there. Nevertheless, that doesn’t wholly excuse his underwhelming performance, even if the Steelers’ excellent defensive standouts have a lot to do with the first-string offense’s limitations. It’s hard to play against T.J. Watt even in a practice setting.

But for how long can we ignore the very underwhelming play that the Steelers are getting from the favorite for the starting quarterback job? At some point, the others are going to take some first-team reps, by design, and frankly, I can’t wait, so we can do better apples-to-apples comparisons.

Practice is practice, indeed, and games are games. Trubisky only has five practices under his belt, which is still not a large sample size. That’s true enough. But it’s also true that it’s what we have to go on thus far, and based on what we have seen up to this point, Trubisky hasn’t done himself any favors. And that’s the point.