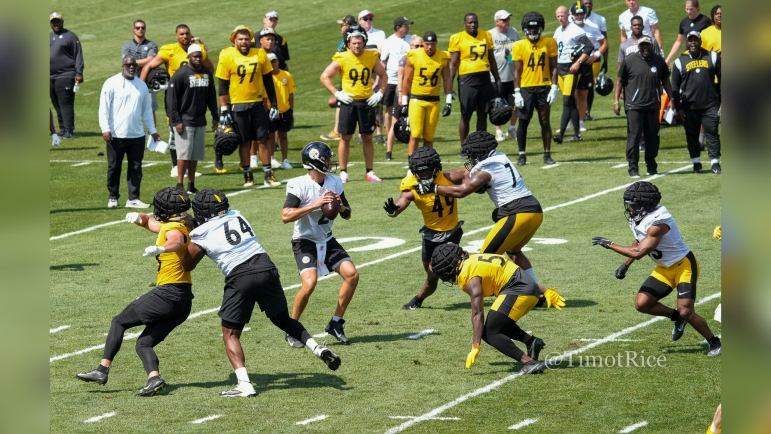 Reasoning: The fifth-year veteran quarterback has thus far looked the sharpest of the three participating in team drills for the Steelers in training camp thus far. The Steelers have consistently maintained throughout the offseason process that he is being given a fair shot to earn the starting job.

One of the biggest issues with fandom is the fact that it makes entrenched opinions harder to dislodge. Preconceived notions of whether a player is good or bad often remain fixed even in light of new and contradictory evidence, causing people to make nonsensically bold declarations.

One such nonsensically bold declaration that we often see is the idea that Mason Rudolph has no legitimate shot at winning the Steelers’ starting quarterback job this summer. Evidently these people who hold this opinion have not been following along close enough to understand how Mitch Trubisky and Kenny Pickett are looking.

Regardless of what one things of Rudolph and his ceiling, the reality is that he merely has to be better than Trubisky and Pickett in August in order to be the starter in September. While it’s still incredibly early in the process, and there is ample reason that he would have a leg up on the others, the plain reality is that Rudolph has looked the most comfortable and has had the most success to this point.

And, again, of course he should, because he has been with the team for going on five years and has worked with Matt Canada for the past two. But one should not penalize a person for successfully doing what they’re supposed to do.

I am neither a Rudolph supporter nor a detractor. I don’t think he’s great, nor do I think he sucks. I do think he has a reasonable chance of starting games this year if what we’re getting from Trubisky and Pickett doesn’t improve significantly over the course of the next few weeks.