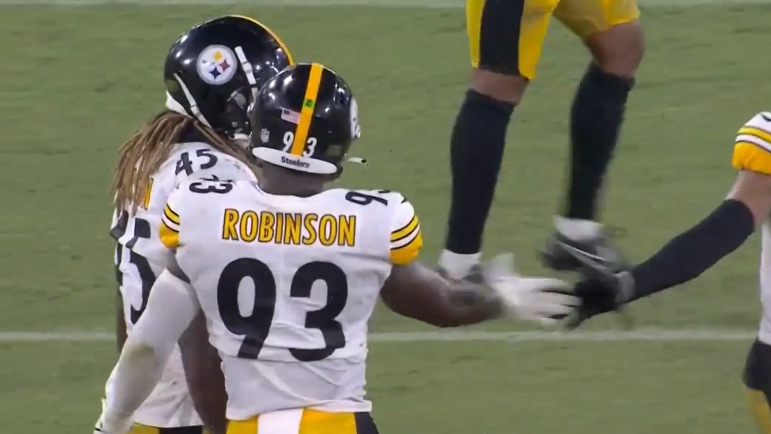 Reasoning: Mark Robinson has been appraised positively on a consistent basis since the Steelers arrived in training camp. While we talked about his stock rising after the first week of camp, we’re now turning the corner toward the regular season, and it’s important to update how he’s come along, taking the same level of play into the preseason and all but assuring himself a spot on the 53-man roster.

The question of whether or not rookie inside linebacker Mark Robinson makes the roster is largely answered. As long as he turns in a competent performance in the preseason finale tomorrow, it should be all but certain, based on the current 80-man roster, that he makes the final cuts.

Because he’s earned it. He’s even got respected alumni talking him up, no less than Vince Williams, who spent some time with the Steelers in training camp earlier this month, having retired a little more than a year ago at this point.

As mentioned above, we talked about Robinson after the first week of training camp simply to note that he didn’t look as raw as expected, which very much was expected given that he has only recently taken up the position of inside linebacker after spending his football life playing running back.

Sometimes he does look like a running back playing linebacker—mostly in the good way. He does bring an urgency to the position that was sorely lacking last season, which Myles Jack is also fortunately bringing to the table. Less so Devin Bush.

I do have to caution here that we are not talking about Robinson as a candidate to be a 2022 starter. You’re not going to see him running out of the tunnel of Acrisure Stadium as the first-team defense gets its names announced individually. He’s just not going to be a starter right away, even if there is potential for that down the line.

No, Robinson will be a contributor to Danny Smith’s special teams units to start out his career, and that’s perfectly fine. Well, we assume that he’s going to. The truth is that he’s only played 24 snaps on special teams, just eight last week, so one wonders if he is going to be a starter on any of those units. If he’s not, he may spend some time as a healthy scratch. And that’s perfectly fine, too. I don’t think he’s going anywhere, and he’s still got plenty to learn, so let him.