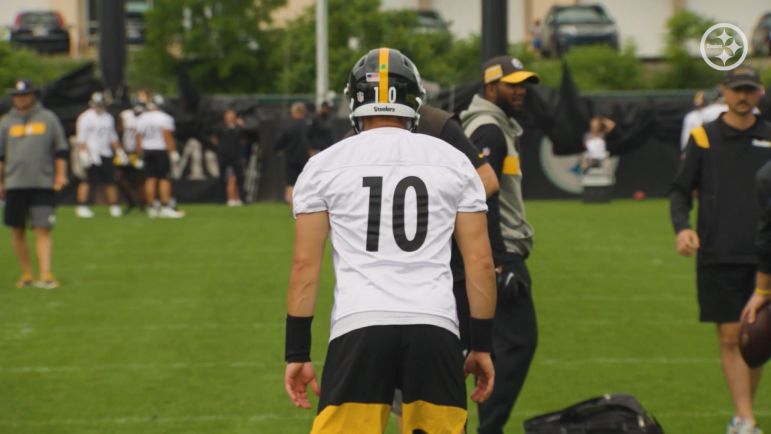 When you’re a player switching teams, there’s always an adjustment period that necessitates some sort of acclimation. However, playing the position of quarterback magnifies this ten-fold, and this appears to be the case for new Steelers signal-caller Mitch Trubisky, the team’s free agent acquisition, as they attempt to, for the first time in 18 seasons, navigate an NFL schedule minus Ben Roethlisberger under center.

After experiencing a mixed bag of success as the #2 overall pick of the Bears back in the 2017 NFL Draft, Trubisky spent last season watching from the sidelines and backing up MVP candidate Josh Allen in Buffalo. Now, after signing with Pittsburgh, the grass appears plenty greener here versus Chicago, as the Steelers boast arguably one of the most-talented and deepest receiving corps across the NFL landscape. After working with the first-team offense for basically all of OTA’s, Trubisky was asked earlier today on 93.7 The Fan about his comfort level commanding the offense.

“I feel very comfortable. I feel like I got a very good grasp with the offense and what coach wants us to do. So I think the first couple weeks of training camp we’re just trying to establish our identity and then see what we’re good at. And my job is just to get the just to get the playmakers the ball. So Diontae, Chase, Najee, Pat, those guys who can go up and make plays.”

All the offensive weaponry is in place and will look to supplement Trubisky in every way possible, and one player who’s poised to do that perhaps more so than others is the aforementioned Najee Harris, the team’s Pro Bowl workhorse back who will look to become the centerpiece of the offense. All that being said, the offensive line remains a work in progress. Several free agent pieces were added to fortify a sore spot from last season, including new starters center Mason Cole and guard James Daniels, the latter of which has prior experience blocking for Trubisky from their Chicago days.

“We got to block them up front and we’re building a great offensive line. And then let those play makers go make plays. And it’s my job to lead the offense, that’s what I’m trying to do.”

Training camp and the preseason is where the unit is expected to gel the most, and based on Trubisky’s comments, he likes what he’s seen thus far up front.