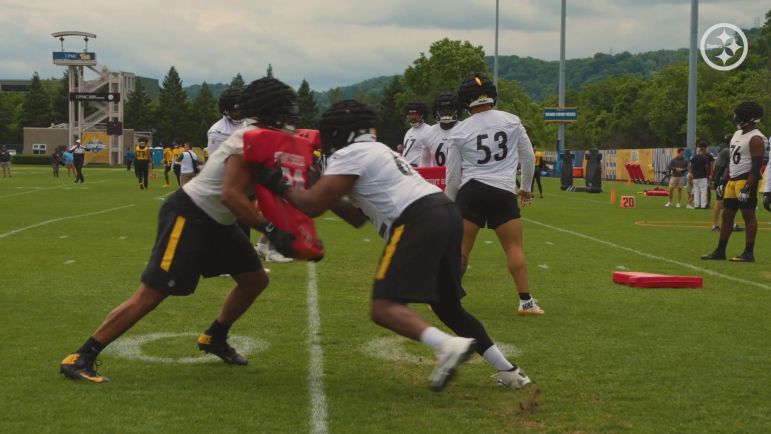 The Pittsburgh Steelers’ opening day starting offensive line from 2020 to 2021 featured four new starters. From 2021 to 2022, it could be as few as two; Mason Cole at center and James Daniels at right guard. Dan Moore Jr. and Chukwuma Okorafor are expected to remain at left and right tackle, respectively, while Kevin Dotson and Kendrick Green are competing at left guard, with the former being the incumbent starter.

Outside of the top five, however, there are still decisions to be made. At least, there’s one decision that has to be made, and that is who the ninth lineman will be. Joe Haeg will be the primary backup, and it’s likely that J.C. Hassenauer is also favored to make the team, with the loser of the Dotson and Green battle destined to be another backup.

He was with the Los Angeles Chargers in 2018 and 2019 while Meyer was there. When Meyer found himself with the Carolina Panthers for the 2020-21 seasons, he ended up following. Now they are both in Pittsburgh, and it’s not a coincidence.

“I am pretty sure”, he told Chris Adamski of the Pittsburgh Tribune-Review, that Meyer encouraged the pro scouting department to reach out to Scott this offseason and sign him. “I had that familiarity with him, and so I had an opportunity to come here so I came here”.

A former college free agent out of Grambling St., the fifth-year veteran has 53 games under his belt, with 19 career starts. He started nine games in total over the past two seasons with the Panthers. He also started nine games in his second season in Los Angeles in 2019. That totals out to 1634 career offensive snaps.

As it would imply, however, he has long held the position of reserve. Scott was not brought in to challenge Dan Moore Jr. at left tackle this season or anything. But he is a guy in that offensive line room who knows Meyer’s vocabulary and teaching style, and perhaps that can be of help to the entire group as they transition to yet another offensive line coach.

The Steelers are on their fourth new offensive line coach since Mike Munchak left. His assistant, Shaun Sarrett, was hired to take over in 2019, but was let go after two seasons. His own assistant, who was hired just two seasons earlier, took over in 2021, that being Adrian Klemm.

But Klemm left in-season to take a college job, and then his assistant, Chris Morgan finished out the year. Morgan actually had previous head offensive line coach experience, and it was thought that he might keep the job. Instead, they went out and hired Meyer. Can he finally provide the Steelers—and Scott—some stability that lasts more than two years?