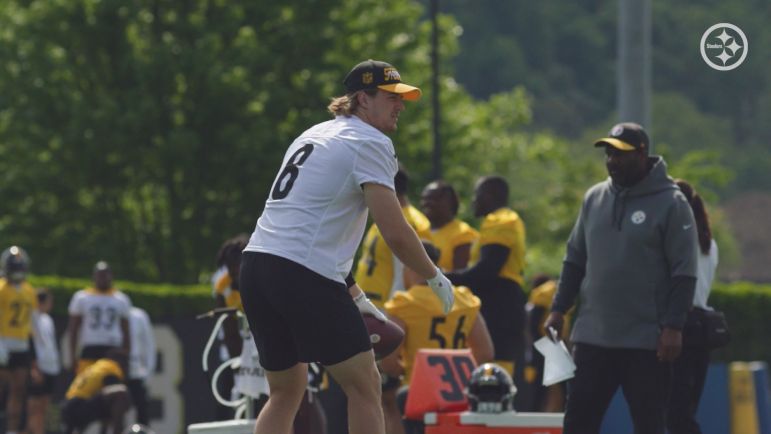 Mike Tomlin has confidence in Kenny Pickett as a leader. For the next couple of weeks, he wants to evaluate him as a quarterback. Of course, those two things can go hand-in-hand. But to be the starter, Pickett’s going to have to make plays once the ball is snapped, not just impress before and after. Speaking to reporters Tuesday, Tomlin said he’s not concerned about any questions over Pickett’s ability to lead the group.

“I’m not overly concerned about that narrative,” he said via the team website. “I think that when you’re 22, 23, 24 years old and you’ve been playing quarterback all your life, you understand those informal responsibilities that come with the position.”

Pickett entered the 2022 NFL Draft as an older quarterback for the position after spending five years at Pitt. He considered entering last year’s draft but decided to return for a final season. It proved to be the right decision, throwing for 42 touchdowns and just seven interceptions, all while leading the Panthers to an 11-win season. He was rewarded by becoming the first QB drafted, taken by the Steelers 20th overall.

Now, he’ll compete with veterans Mitch Trubisky and Mason Rudolph for the starting job. After running with the one’s during the spring, Trubisky is poised to enter the summer as the starter, but he’s not sewn up the starting job. Tomlin outlined some of the baseline things Pickett can do to impress this camp.

“I’m more concerned about tangible things; accuracy, taking care of the ball and things of that nature.”

Accuracy and ball security are the two most important components of fundamental QB play. Turning the football over is a quick way to remove yourself from competition while Matt Canada has preached “RAC” (run after catch) throws for his offense, allowing receivers the chance to make plays post-catch. Even things as simple as having clean center/quarterback and quarterback/running back/wide receiver exchanges. Balls that hit the ground result in dead plays, there aren’t any pile-ups during practice, and become wasted moments.

Leadership is an important quality of quarterback play and the Steelers have a leadership void with the loss of Ben Roethlisberger and a high amount of offensive line turnover. But Tomlin is confident Pickett’s proven he can check that box.

“I watched him do it next door in terms of leading his guys and being what we need quarterbacks to be. I don’t think that’s gonna be a significant discussion.”