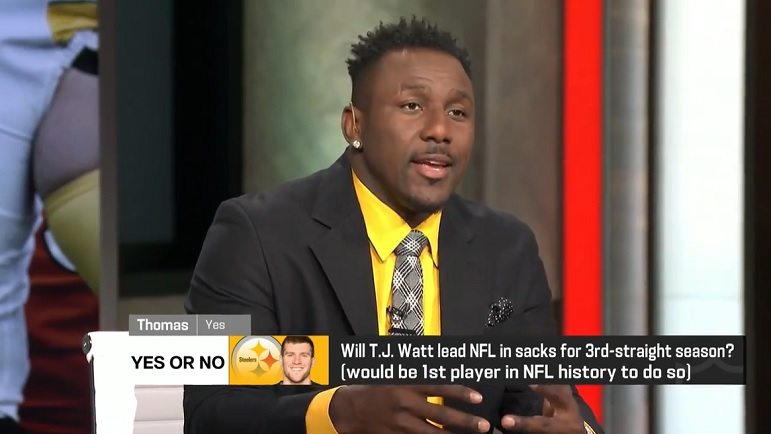 In 2022, Pittsburgh Steelers outside linebacker will have a short at doing something that no other player has ever done in the history of the NFL and that’s leading the league in sacks three consecutive seasons. On the Friday edition of ‘Total Access’ on the NFL Network, former NFL linebacker Thomas Davis was asked to give his thoughts on whether or not Watt can accomplish that feat in 2022.

“He will absolutely lead the NFL in sacks for a third year,” Davis said. “And the reason why I think that, because when you look at T.J. Watt, he’s physically gifted in a way that a lot of us just wasn’t blessed with. But one of the things that sets him apart from other guys is his ability to work hard play in and play out. He’s going a hundred miles per hour every single play.

“And I think a little bit of T.J. Watt wants to separate himself from his brother. His brother had a legacy that he developed and he started a long time ago and T.J. wants to show, ‘Hey, I’m not just a little brother. Hey, I’m here to stay.'”

That’s great reasoning from Davis and it’s extremely hard to disagree with. Watt does indeed go hard on every play, for starters. Additionally, you know he would like to accomplish a feat that his older brother J.J. Watt has yet to do during his lengthy career.

Last season, Watt registered 22.5 sacks and that tied Michael Strahan for all-time single season record. The year prior, Watt led the league in sacks with 15. As Alex Kozora already pointed out several weeks ago, Watt has already joined Reggie White as the only players since 1982, when sacks became official, to have four consecutive seasons with 13+ sacks. Over his first five years in the NFL, Watt has recorded 72 career sacks, an absurdly high number reached by only a handful of players over that span.

In 2022, Watt can again join White in a rare-air stat. Should Watt reach 18+ sacks, he will join White as the only two players in NFL history with 90+ sacks through their first six seasons in the league. 18 sacks will certainly be tough to achieve by Watt in 2022, but he is certainly capable of it.

Watt, by the way, only needs nine more sacks to become the Steelers all-time franchise leader in that statical category. Former Steelers outside linebacker James Harrison currently holds the record with 80.5. watt could quite possibly break Harrison’s record by the team’s bye week in Week 9.