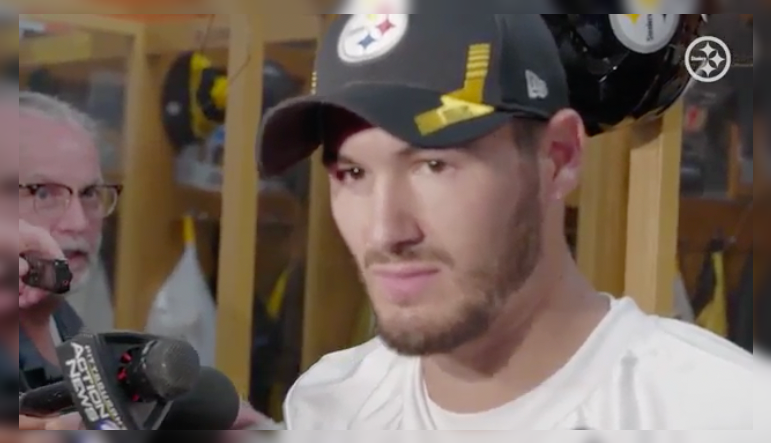 The Pittsburgh Steelers know that their quarterback room is not being viewed as the envy of the NFL right now. In the wake of Ben Roethlisberger’s retirement, they have filled out the position with a journeyman former semi-bust, a rookie first-round pick who may have sat until the third round if they didn’t take him, and a fifth-year player they added the first two players to make sure they don’t have to start.

Of the trio, the first, Mitch Trubisky, is the one who is expected to be on the field when the regular season begins. A former second-overall draft pick, Trubisky had limited success as a starter for the Chicago Bears for the better part of four seasons before taking a backup job with the Buffalo Bills last year.

The Steelers gave him an incentive-laden contract knowing that if the opportunity came along, they would add competition via the draft, which they did with the selection of Kenny Pickett 20th overall, but entering training camp, it remains Trubisky’s job to lose—even if that’s not saying much, according to The Athletic, which ranked him 33rd out of 35 quarterbacks in a list compiled by Mike Sando with an annual survey of 50 league coaches and executives.

“That just goes to show, if you are not a jerk you can get resurrected by relaxing for a year and letting the rest of the shitty quarterbacks be shitty so that you can look good, and then they’ll circle back to you”, Sando quotes an offensive coach as telling him about Trubisky.

Not the most flattering description in the world, but it’s not like he comes to the Steelers with the early makings of a Hall of Fame rap sheet. His career numbers are far from impressive, and there’s a reason that he had to settle for a backup job last year. There’s a reason there weren’t any teams willing to sign him this offseason to be a franchise quarterback.

Sando quotes one unnamed defensive coach as saying of Trubisky, “I can’t say he’s a legitimate starter”, which, well, is fair. After all, he wasn’t a starter last year. Another defensive coach recalled facing him in Chicago. “They ran some of that Kansas City gimmicky stuff, but when it came down to it, he didn’t see pressures very well. He did not diagnose defenses very well at all”.

Of course, Trubisky will be the first one to tell you how much he learned and grew over the past year while not playing in Buffalo, learning from quarterback Josh Allen and former offensive coordinator Brian Daboll, who earned the head coaching job for the New York Giants this offseason.

He insists that he is a new player and that everybody is going to see that this year, but that’s a tall order. When you have four or five years’ worth of resume sitting out there, opinions are going to be tough to change, and quarterbacks don’t typically resurrect their careers after an initial opportunity. Opinions around the league seem to remain guarded, if not low, about his abilities, even if not his character.