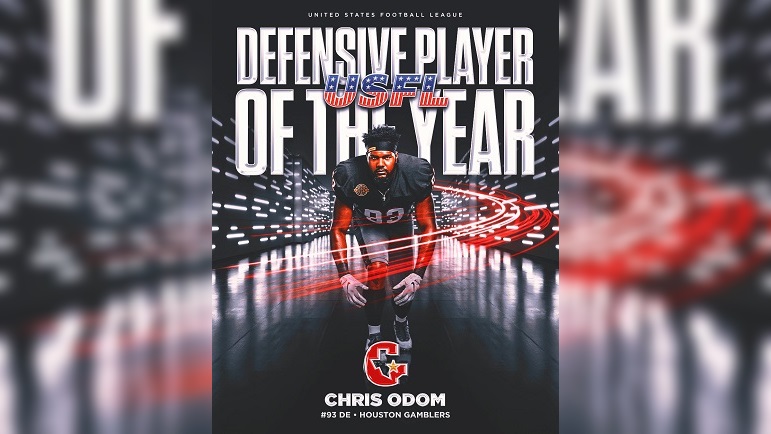 The USFL wrapped up their inaugural season this past weekend, and ahead of that happening, several individual awards were announced. One of those included Houston Gamblers defensive end Chris Odom being named Defensive Player of the Year. On the heels of that, Odom apparently has the interest of at least three NFL teams, according to his agent. Hopefully, the Pittsburgh Steelers are one of those three teams.

3 workouts scheduled for @Chrisodom98 today. The calls are starting to come in fast for the USFL Defensive Player of the Year.

Odom got after opposing quarterbacks all season long as the Arkansas State product led the USFL in both sacks (12.5) and forced fumbles (six) by wide margins. In fact, no other player had more than nine sacks or three forced fumbles on the season. He also had 41 total tackles on the season with eight resulting in lost yardage. Odom also blocked four kicks for Houston this past season.

Odom has appeared in 11 total NFL games to date, with seven of them coming with the Packers in 2017 and four more with Washington in 2019. He has two career sacks, 16 total tackles, two tackles for loss and one forced fumble to date in 106 total defensive snaps played. He’s also been credited for 56 special teams snaps in his limited NFL play.

At his 2017 pro day, Odom measured in at 6040, 262 pounds. While listed by the Gamblers as a defensive end, he would be an outside linebacker in the Steelers’ defensive system.

Why should the Steelers look at Odom? Well, as of early July, they don’t have much in the way of comfortable depth at the outside linebacker position. Behind starters T.J. Watt and Alex Highsmith currently sit Genard Avery, Derrek Tuszka, Tuzar Skipper, Delontae Scott and rookies Tyree Johnson and T.D. Moultry. In short, there’s plenty of room for a player such as Odom to compete for a 53-man roster spot later this summer.

The Steelers do have a history of signing developmental league players. In fact, Steelers center J. C. Hassenauer was signed out of the AAF league in 2019.

The Defensive Player of the Year put on a show every week for the @USFLGamblers ⬇️ pic.twitter.com/MnoMARIkfO