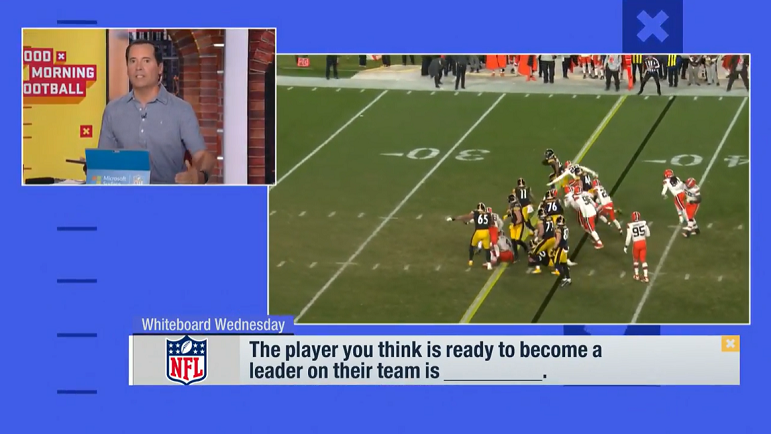 Entering his second season in the NFL, there’s a real opportunity for Pittsburgh Steelers’ star running back Najee Harris to assert himself as a true leader of the Steelers’ franchise, now and moving forward.

With longtime quarterback Ben Roethlisberger retired, and key veterans along the offensive line now off into other stages of life, the Steelers’ offense under head coach Mike Tomlin and second-year coordinator Matt Canada needs some leadership to step up. It’s easy to look at the likes of veteran quarterback Mitch Trubisky and rookie first-round pick Kenny Pickett as those potential leaders of the Steelers’ offense — at least in 2022 — but the time is now for Harris to step up and grab hold of the leadership mantle offensively in the Steel City.

Good Morning Football host Will Selva seems to agree, tabbing Harris as his player that is ready to become a team leader during a segment on the popular NFL Network morning show Wednesday, according to video via NFL.com. While fellow panelists Mike Garafolo, Shaun O’Hara and James Palmer picked quarterbacks, including Jacksonville’s Trevor Lawrence, New York Jets’ Zach Wilson and Indianapolis’s Matt Ryan, Selva looked deep into the Steelers’ backfield to tab Harris as his selection.

“I’m going with Najee Harris. Why Najee Harris? Well, there is no Big Ben. [Kenny] Pickett is a rookie. [Mitch] Trubisky is still trying to establish himself as a leader and just as a quarterback there in Pittsburgh,” Selva said to Garafolo, O’Hara and Palmer Wednesday, according to video via NFL.com. “There is a former Alabama teammate of Najee Harris’, his name is Chris Owens, and he had talked about how Najee was at Alabama…He would bring the energy. And I think that’s what he’s gonna do here.

“Mike Tomlin also had told a podcast recently that Cam Heyward has actually taken Najee Harris under his wing, and really, really solidified that leadership gene in him. So for me, I think it is Najee Harris there in Pittsburgh.”

Harris was a team leader at Alabama during his junior and senior seasons, capturing the attention and respect of his teammates, not only with his play on the field, but with is work ethic and commitment off the field. So far during his time in Pittsburgh, he’s doing the same thing.

With a leadership role staring him in the face, Harris is embracing it. However, he knows leaders need to come from every position group, not just from him at the running back spot.

“Obviously, I’m trying to be that leader, too, but in a team, I feel like everybody needs to be a leader at their position”, Harris told Missi Matthews for the team’s website in June. “For a running back, I want to hold the running backs to a certain type of standard of what we need to do when we get in the game.

“I want to be the leader for the team, but we also need leaders for every position room, and that’s why we need to come together, that’s why we’re here laying this foundation, who are the guys in the room,” Harris added. “That’s what we’re doing right now.”

Leadership is something that comes natural for Harris, no matter what level of football he’s at. He was a team captain in high school, became a team captain in college under Nick Saban, and is well on his way to a captaincy role in the Steel City despite being a young player overall.

It’s a natural gene for Harris, according to Steelers’ head coach Mike Tomlin, who talked about it on The Pivot Podcast with hosts Ryan Clark, Channing Crowder and Fred Taylor in June.

“I’m bridging a transitional leadership relationship between Cam Heyward and Najee,” Tomlin told the show. “Najee is a leader. He was a born leader. He’s got good football morals. He sees the game the way that we see the game. He wants to be a part of what’s right. So that needs to be cultivated. That needs to be trained. Really, going back into the last year, I’ve challenged Cam Heyward to help him grow in that way.”

With a full year in the NFL under his belt, and a full offseason behind him, we’ll see if Harris ascends into that leadership role with the black and gold right away in training camp at Saint Vincent College in Latrobe.