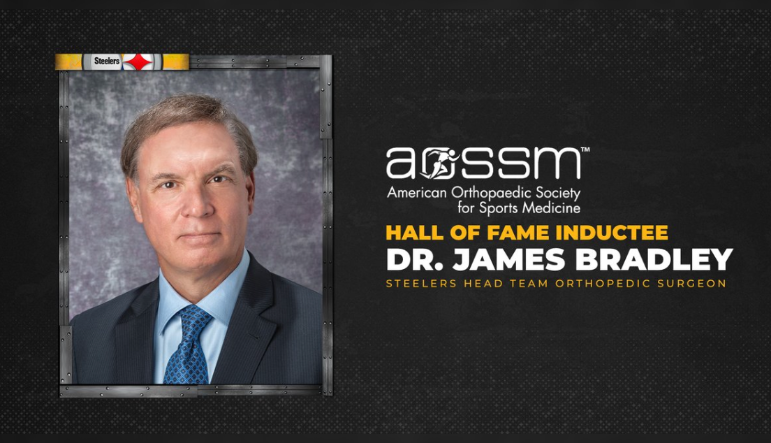 For more than 30 years, Dr. James Bradley has held down the role of the official orthopedic surgeon of the Pittsburgh Steelers.

Throughout his long career, Dr. Bradley has won a number of awards and other accolades, and is considered one of the best orthopedic surgeons in the country. On Tuesday, he added to his long resume’, landing in the American Orthopaedic Society for Sports Medicine Hall of Fame, according to an announcement from the Steelers’ Community Relations Twitter page.

Congratulations to Dr. James Bradley on his induction into the American Orthopaedic Society for Sports Medicine (AOSSM) Hall of Fame. pic.twitter.com/zivSfbfTNl

Bradley, a world-renowned American Board-Certified Orthopedic surgeon and leader in sports medicine research and treatments, played a key role over the last three decades in helping members of the Pittsburgh Steelers get back onto the field as quickly as possible and as healthy as possible after suffering injuries on the field. Bradley played a key role in helping former Steelers’ quarterback Ben Roethlisberger get back onto the field in 2020.

Roethlisberger’s elbow injury last year was so severe, it was potentially career-ending, Dr. Bradley believed, after the future Hall of Famer suffered the injury in Week 2 of the 2019 season against the Seattle Seahawks, as he tore three of the five flexor tendons completely off the bone in his right elbow. Dr. Bradley put him back together again, helping Roethlisberger get back onto the field for the 2020 and 2021 seasons before retiring after 18 seasons in the NFL.

Along with his induction into the AOSSM Hall of Fame Tuesday, Dr. Bradley was awarded the Arthur C. Rettig Award in 2019 for excellence in academic research given by the National Football League Physicians Society. In February of 2014 Dr. Bradley was honored with the Jerry Hawk Rhea Award from the NFL for being a dedicated and outstanding NFL Team Physician.

Outside of his work with Burke & Bradley Orthopedics and the Steelers, Dr. Bradley is a consultant to local high school and collegiate athletes at the local level in the city of Pittsburgh.