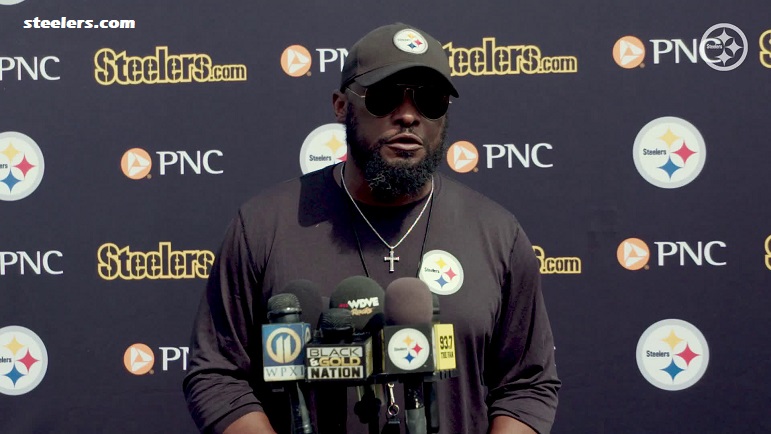 The Pittsburgh Steelers have now wrapped up their third training camp practice of 2022 at Saint Vincent College in Latrobe, and after the Friday session was completed, head coach Mike Tomlin updated the health of his team.

“From a health standpoint, not a lot new to talk about, just an update on some guys I talked to you about yesterday,” Tomlin said on Friday. [Pat] Freiermuth has a hamstring. He probably can be characterized as day-to-day. Levi Wallace is ill. It could be characterized as is day-to day. It’s status quo for the others. Chase Claypool wasn’t able to finish. He has a shoulder injury. It’s being evaluated. Don’t know the severity of it. I’ll let you know when I do.”

Steelers tight end Pat Freiermuth (hamstring) missing Friday isn’t a surprise after failing to finish Thursday’s session with tightness. We now know it is a hamstring injury, and that’s now day-to-day. Cornerback Levi Wallace (illness) hopefully won’t keep him sidelined too long. As for wide receiver Chase Claypool (shoulder) it appeared that it was the right shoulder that he injured on Friday.

“I really don’t know when it occurred, to be honest with you,” Tomlin said of Claypool’s shoulder injury. “It’s probably not serious.”

Steelers safety Miles Killebrew (pectoral) remained out of practice on Friday. He suffered his injury on Wednesday and has not practiced since. Two other players that sat out Friday, safety Minkah Fitzpatrick (wrist) and defensive tackle Tyson Alualu (knee), started off training camp on the Active/NFI and Active/PUP lists, respectively. It sounds like Fitzpatrick has graduated to catching a few footballs on the side, according to Alex Kozora on Friday. Additionally, wide receiver Diontae Johnson (personal) did not practice during the team portion again on Friday, and that’s due to his contract situation.

The Steelers next training camp practice will take place on Saturday at Saint Vincent College.