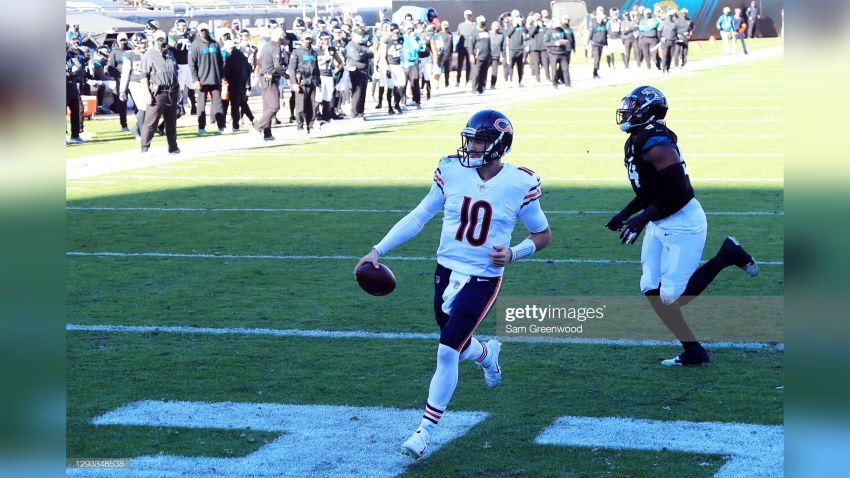 The presumed starting quarterback for the Pittsburgh Steelers, at least from what we’ve seen thus far in OTAs, is free-agent signee Mitch Trubisky. He’s often maligned, as his Bears’ career was filled with many highs, and several lows, including some ugly turnovers at inopportune moments. However, he does offer glimpses, as we’ve seen before, that show he can not only be an adequate starter, but can also do so at a highly functional level.

Back in 2018, quarterback Mitch Trubisky was coming off a rookie season with the Bears in which he took over for an inept Mike Glennon and threw for 2,193 yards, seven touchdowns and seven picks. Entering his sophomore season, he was expected to make a jump to the next level; after all, he was the #2 overall pick in the previous draft, ahead of the likes of guys like Patrick Mahomes and Deshaun Watson. That season, Trubisky had a passer rating of 95.4 with 3,223 yards, 24 touchdowns and 12 interceptions in 14 games in 2018 as he was voted to his first Pro Bowl after leading the team to a playoff berth.

Some of his highlights that season include the team’s week four win against Tampa Bay, in which Trubisky threw for 354 yards, six touchdowns, including five in the first half, and a sterling passer rating of 154.7. He was voted the FedEx Air Player of the Week for his efforts. Following the team’s Week 5 bye, he followed that performance up with a 316-yard, three touchdown and one interception outing in a 31-28 loss to the Dolphins. He was quickly becoming a fantasy football darling this season, as after that, he threw for 333 yards, two touchdowns and two picks, along with 81 yards rushing and another score on the ground versus the Pats. In Week 10 against division rival Detroit, he threw for 355 yards, three touchdowns and also ran for 18 yards and another touchdown, and was subsequently awarded NFC Offensive Player of the Week for his efforts.

In the Wild Card round against Philly that year, Trubisky overcame two early picks to nearly rally his team to victory, as he led a 33-yard drive to put the team in position for the game-winning field goal. However, kicker Cody Parkey’s infamous “Double Doink” field goal miss doomed the team.

Throughout his four-year career with the team, as I stated earlier, it was filled with many, many positives but also given somewhat of a black eye, as the turnovers continued to pile up, digging the team into huge deficits. It ultimately cost him his starting job as the team chose to roll with trade acquisition Nick Foles, and despite seeing time during Foles’ injury-related absences, the writing was seemingly on the wall. Trubisky finished his Bears’ tenure holding club records in both career passer rating at 87.2 and career completion percentage, at 64%.

So what can we gather from his sample size to give us hope that he can put the past behind him? For starters, sometimes in these situations, a benching is the best solution possible, as it allows players to sit back and watch how plays and certain coverages develop. This was seen as a problem of Trubisky’s throughout his career, the ability to read coverages sufficiently. His athleticism is undoubted, as his 421 yards rushing during his banner year would’ve easily been the most of any Steelers QB since the days of Kordell Stewart in the late 90s/early 2000s.

Last season, Trubisky spent the season on the bench, watching and working in tandem with MVP candidate Josh Allen and offensive coordinator Brian Daboll. Trubisky will always be compared to Mahomes, as he was taken ahead of him, so who better to take a timeout, to sit, study and learn from than one of Mahomes’ fiercest rivals in Allen?

Sometimes the grass is indeed greener on the other side, and we’ve seen these type of QB reclamation projects work out before, such as the Titans’ Ryan Tannehill. Why can’t it work out for Trubisky? In Chicago, Trubisky had a two-headed rushing attack led by Jordan Howard and shifty air back Tarik Cohen, a dump-off specialist in the screen game. The receiving corps left a lot to be desired though, featuring the likes of Allen Robinson, a Pro-Bowler who was often doubled, Josh Bellamy, draft bust Kevin White, Taylor Gabriel and Anthony Miller, who’s currently a Steeler, and probably at best, the sixth-best on the squad?

The talent differential between Chicago and Pittsburgh currently, is astounding, as the Steelers offer plenty in the receiving corps, including Pro Bowler Diontae Johnson, size/speed freak Chase Claypool, second-round pick George Pickens, fourth-round pick Calvin Austin III and former Ravens third-rounder Miles Boykin. That doesn’t even include All-Pro returner/receiver Gunner Olszewski. The ground attack is obviously led by Pro Bowler and workhorse Najee Harris, who much like Cohen in Chicago, possesses soft hands. It remains to be seen how the offensive line will shape up, although the team invested heavily in it during the free agency period. Let’s not forget the head coaches involved here, as comparing Matt Nagy and Mike Tomlin is literally an apples-to-oranges conversation. The table seems to be set for Trubisky to prove his doubters wrong, as long as he can cut down on the turnover problems that plagued a once promising career.