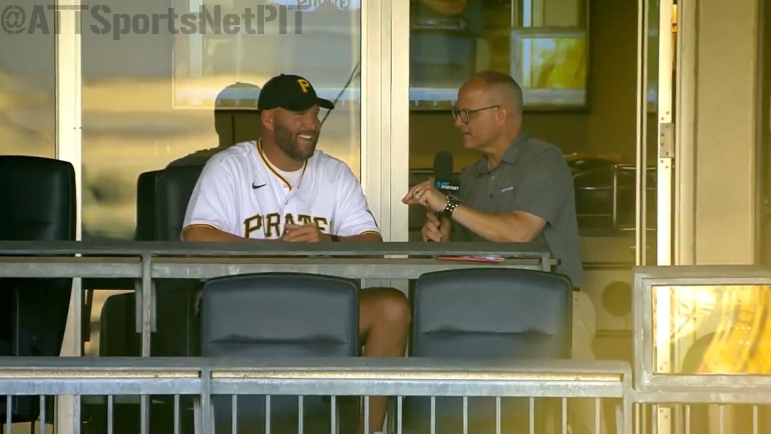 Former Pittsburgh Steelers quarterback Ben Roethlisberger spent 18 seasons under center at Heinz Field. Now he’s retired, and Heinz has a new name. And from the sounds of it, at the moment, he misses the stadium name more than the game, or at least practicing.

Roethlisberger threw out the first pitch before the Pirates game yesterday, and Dan Potash got a chance to speak with him in the stands for a couple of minutes later on. He asked the father of three if he was now getting the itch to play with the Steelers being in Latrobe.

“Any itch that I have, I’m scratching by texting Pat Freiermuth right now, seeing how he’s doing and everything”, he said with a laugh. “I’m enjoying this, being here with my family. I wish those guys nothing but the best. I’m excited for them. I hear things are going well over there. Excited to maybe sneak over there one day and catch them at practice, but as for being out there, I’m good”.

While taking in the 3rd inning of the @Pirates & Phillies, Ben talked with Dan Potash about being…<checks notes>…nervous? pic.twitter.com/oVSy3aejpN

After Roethlisberger retired, he did talk about how he wondered how he would feel once the Steelers were in Latrobe, about whether or not he would indeed get that itch. I’m sure there’s a part of him that still wants to be ‘Big Ben’, but all he has to do is think about the work that goes into being that guy, and that twinge of arthritis in his knees probably kicks in as a helpful reminder.

Now 40 years old, he is entering a monumental transitional chapter of his life, one without a true professional component, without an employment identity. He is, of course, a husband, a father, a son, and any other relative connection you can come up with, I’m sure. That’s his focus.

But football is a part of his family’s life. He already talked previously about how his oldest son has told him that he wants to go to every Steelers home game. The Steelers aren’t going away—and he probably isn’t, either.

That can mostly be a good thing, but that’s really up to him. Choosing his words with a bit more forethought would be a good start, but that was never exactly his specialty, especially not when it comes to talking on the radio and in other more informal settings.

It’s no surprise, though, to hear that Freiermuth is the one that he texts, even though they’ve only known each other for a little over a year. The latter was a second-round draft choice in 2021 out of Penn State, but it didn’t take him long to become one of Roethlisberger’s favorite targets.

His locker was right next to Ben’s, where Vance McDonald was, and where Heath Miller was years before that. But Roethlisberger is now in the past in terms of Steelers football. The question is, who can Freiermuth be for Mitch Trubisky, Mason Rudolph, and Kenny Pickett?