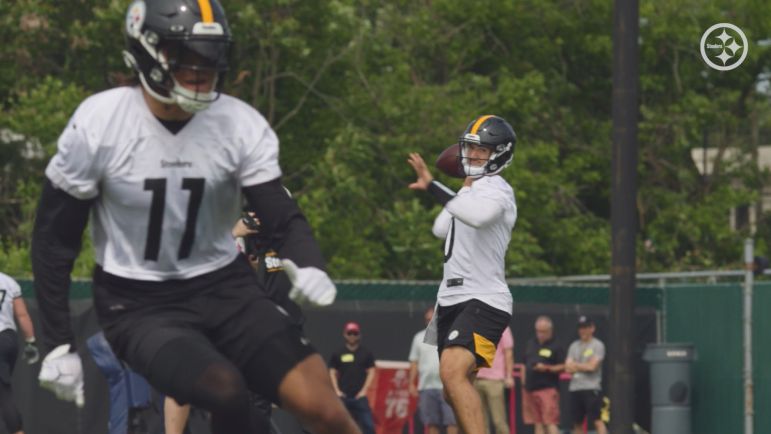 In three weeks the Pittsburgh Steelers will hit Chuck Noll Field in the hills of Latrobe at St. Vincent College for another addition of training camp. This time, a bunch of new faces will be involved as the Steelers undergo a bit of a transition from top to bottom in the organization.

Though change was significant this offseason, the Steelers feel pretty good about where they’re at heading into their 88th season overall. As things stand in early July, the roster looks pretty solid top to bottom. Though there are still some holes remaining at backup running back and No. 3 outside linebacker for the time being, the Steelers appear in good shape overall.

Certain positions stand out above the rest in their depth and overall strength, while others lag a bit behind,  according to Pro Football Focus’s Sam Monson, who highlighted the biggest strength and weakness for all 32 teams in the NFL Thursday morning.

For the Steelers, Monson had interesting selections, tabbing the Steelers’ rebuilt receiving room as the team’s biggest strength, while listing the Steelers’ new quarterback room as its biggest weakness, but not for the reason many would expect reading that.

According to Monson, the Steelers’ rebuild in the wide receiver room showed just how good Pittsburgh is at the drafting portion of things at the position. After losing JuJu Smith-Schuster, Ray-Ray McCloud and James Washington in free agency to Kansas City, San Francisco, and Dallas respectively, the Steelers turned around and drafted Georgia’s George Pickens and Memphis’ Calvin Austin III in the 2022 NFL Draft, shoring up the depth behind Diontae Johnson and Chase Claypool.

Pittsburgh also retained veteran slot option Anthony Miller, who spent the 2021 season on the practice squad, claimed veteran Miles Boykin from the Ravens, and signed special teams ace Gunner Olszewski from the Patriots in the offseason, playing a role in the Steelers’ wide receivers being the team’s biggest strength, according to Monson.

“Few teams have shown the kind of consistent success in drafting receivers as the Pittsburgh Steelers. So it makes sense that reports suggest they don’t want to pay Diontae Johnson over $20 million a year — they have a consistent track record of replacing receivers and developing young players without huge investment,” Monson writes regarding the Steelers’ wide receiver room. “The additions of George Pickens and Calvin Austin III in the draft may allow them to let Johnson walk in a year’s time without concern, and in the meantime they all get to play in the same offense, along with Chase Claypool and also Pat Freiermuth at tight end.”

On paper, it’s a really strong group, one that brings a serious level of excitement ahead of the 2022 season. How they all fit together on the field remains the question ahead of training camp though. That said, new quarterbacks Mitch Trubisky and Kenny Pickett couldn’t ask for a better initial group to work with in the black and gold.

This was an attempt at galaxy-brain thinking from Monson, and it doesn’t quite work.

“Pittsburgh’s biggest weakness isn’t quarterback just because of the standard of Mitchell Trubisky or rookie Kenny Pickett, but also because of the style of both players and what it means for the rest of the offense,” Monson writes. “Ben Roethlisberger had the league’s fastest average time to throw in 2021 (2.26 seconds) by some margin. That hid a lot of issues along the offensive line. Kenny Pickett was over 3.2 seconds in college, and Trubisky also exists closer to the longer end of the spectrum. That will stress the pass protection a lot more than it was a year ago and could make the entire offense look a lot worse.”

So, it’s not the level of play, but the style of play? What in the world? Monson didn’t even take into account that Trubisky and Pickett are ideal fits in second-year offensive coordinator Matt Canada’s system, which should allow the offense to have more balance and creativity, taking some pressure off of the offensive line overall.

Of course, it’s fair to wonder if the offensive line can hold up with quarterbacks who hold onto the football longer. That’s not understanding Canada’s system at all though, which wants the football out quickly in space. That’s largely why Roethlisberger was so quick on the release last season, not entirely due to the offensive line.

If we’re naming the Steelers’ biggest weakness right now, it’s probably the offensive line or the depth at cornerback, full stop. That should have been the analysis from PFF’s Monson, rather than trying to be smarter than everyone and highlighting one thing within the game of the quarterbacks.