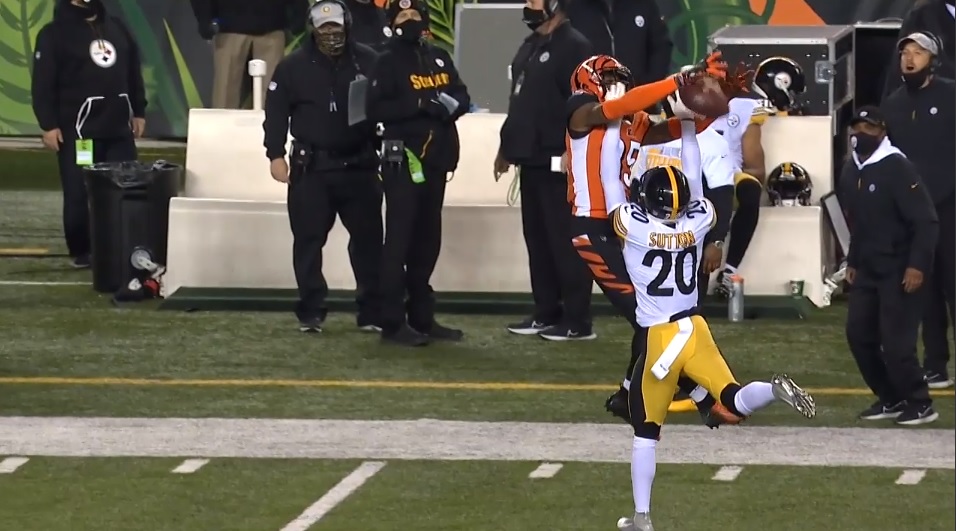 Blink, and you’ll have missed the overall accumulation of high-end talent at the cornerback position in the AFC North in recent seasons for the Cincinnati Bengals, Baltimore Ravens, Cleveland Browns and Pittsburgh Steelers.

While some of the big-name players such as the quarterbacks, running backs and pass rushers steal the headlines within the division overall, quietly the cornerbacks in the division are right there with some of the best across the league. Names like Marlon Humphrey and Denzel Ward should ring a bell when it comes to some of the best in the NFL today, and so too will guys like Greg Newsome and Chidobe Awuzie in the coming seasons.

Overall, it’s a very deep, talented group of cornerbacks in the AFC North, top to bottom. That said, one team stands out above the rest at the position, in terms of star power and overall depth for a second straight season.

Though he played in just 12 games last season due to a torn pectoral muscle suffered against the Pittsburgh Steelers, Marlon Humphrey remains one of the best overall cornerbacks in the NFL with his ability to slide inside to the slot, or play outside on the boundary at exceptionally high levels.

Humphrey is a physical corner that thrives on contact and appears to be the latest iteration of Charles “Peanut” Tillman with his ability to punch footballs out, forcing fumbles. He needs to make more plays on the football in the air overall with just eight career interceptions in five seasons, but there’s no denying his greatness forcing fumbles, making key tackles, and providing sticky coverage on the boundary.

Veteran Marcus Peters returns from a torn ACL suffered in training camp last season itching to get back to the high level he played at in 2020. If he can return to form he’ll provide the Ravens with a high-end coverage cornerback who makes great plays on the football and forces turnovers at a high rate.

Behind those two veterans in Peters and Humphrey, the Ravens have to feel great about their depth overall, especially after adding veteran cornerback Kyle Fuller in free agency, giving Baltimore major flexibility at the position. Fuller has had an up and down career, but he should be able to thrive in Baltimore’s defense, which gets a ton of pressure on quarterbacks overall.

Second-year pro Brandon Stephens is a very intriguing player overall with great length and speed. He struggled at times in 2021 after being forced into the lineup due to injuries, but all the tools are there to be the next strong Ravens’ cornerback in a long line of them. Rookie Jayln Armour-Davis could be the next star for Baltimore though, especially if he finds consistency in his game. He’s a tremendous athlete who thrived in 2021 at the University of Alabama and possesses great ball skills overall. He was a steal in the middle rounds for Baltimore.

This is a very deep, talented group overall for Baltimore, one that should put the AFC North on notice.

The heavy investment at the position in recent years through the draft is paying off in a major way for Cleveland.

Denzel Ward, Greg Newsome and Greedy Williams can match up against any trio at the position in the league, which is a scary though overall on a loaded Cleveland defense. Ward has developed into a terrific coverage cornerback, while Newsome has the makings of a star against the run and in coverage. Williams, when healthy, has shown flashes of the stardom he achieved in college at LSU as a coverage guy, though he’s rather soft coming downhill against the run.

The concern here for the Browns behind a terrific trio is the lack of overall depth.

Reggie Robinson III, A.J. Green and Parnell Motley all have NFL experience as multi-year veterans at the pro level. That said, none truly move the needle overall at the position, at least right now. Green is the most intriguing of the bunch, having received playing time last season for the Browns due to injuries, recording 13 tackles and an interception in 2021.

Rookie Martin Emerson II out of Mississippi State certainly fits the mold that the Browns have been looking for in recent seasons, possessing a similar style to Newsome, which will give Cleveland a long, athletic, physical cornerback to develop overall. He’s still at least a year away from playing meaningful snaps though.

Coming off of a busy offseason in 2021 that saw them add the likes of Chidobe Awuzie and Mike Hilton at the position, the Bengals now find themselves in great shape at the position moving forward, especially after making a run to the Super Bowl in 2021.

Awuzie really developed nicely into a shutdown cornerback down the stretch and in the playoffs, realizing his potential overall at the position. He has good ball skills overall and can stick in coverage, along with playing well against the run. Entering a second season in Cincinnati’s defense, he could take another step and ascend into stardom.

Hilton was Hilton in 2021 for Cincinnati, proving to be a menace in the box as a run defender and blitzer, really helping transform Cincinnati’s defense, much like he did during his time in Pittsburgh. He’s one of the best slot corners in football, even if his best skillset isn’t coverage.

The Bengals did a nice job this offseason moving on from Trae Waynes and his disastrous contract, especially after he didn’t play a snap for them. In his place, Cincinnati brought in rookie Cameron Taylor-Britt out of Nebraska, a guy I’m very high on due to his length, athleticism and overall physicality. He should be able to push Eli Apple for the starting job opposite Awuzie this season, even with Apple coming off of a bounce back 2021 season overall.

Tre Flowers was a great retention in free agency, especially after the Bengals claimed him on waivers last season after a shocking release from the Seattle Seahawks. He has all the necessary tools to be a strong coverage cornerback in the NFL. He just needs to find some consistency. There’s a good chance he finds it in Cincinnati.

Depth remains a slight concern overall, which places them third on this list. Jalen Davis is back for another season, but offers very little to the cornerback room. The Bengals also have three rookies at the position (four if you include Taylor-Britt) in Allan George, Delontae Hood, and Bookie Radley-Hiles. Lots of work to do from a depth standpoint for the Bengals.

I like the way the Steelers’ cornerback room is taking shape after a busy offseason, at least from a starting trio perspective.

Retaining Ahkello Witherspoon in free agency and bringing in veteran Levi Wallace from Buffalo were great moves by then-GM Kevin Colbert.  Those two will form a strong trio with Cameron Sutton, who played rather well in his first full season as a starter for the black and gold in 2021.

Witherspoon is coming off of a terrific month-and-a-half stretch to close the season for Pittsburgh, performing like a true, lockdown No. 1 cornerback, while Wallace has always been a steady coverage guy who is good against the run and has underrated ball skills. Behind those three though, major questions remain, making this the “worst” group in the division, based on my rankings.

I’m not giving up on James Pierre just yet, but he got exposed significantly in 2021 while playing major reps. He flashed at times, but too often was beat deep and lost track of receivers leading to major splash plays. He’ll have to bounce back in a big way in 2022 for me to feel better about this position for the Steelers.

Slot cornerback Arthur Maulet played well against the run in 2021 and surprised a bit as a coverage guy, but he feels maxed out at this point for the Steelers. Fourth-year cornerback Justin Layne has not carved out any sort of role as a cornerback on the Steelers’ defense, which is a major disappointment overall. He’s been good on special teams as a coverage guy on kicks and punts, but that’s not what the Steelers spent a third-round pick on in 2019.

Outside of those six, depth is a major concern. Undrafted free agents Carlins Platel and Chris Steele have real opportunities to battle for a spot on the 53-man roster and the practice squad, while second-year pro Linden Stephens continues to hang on by a thread. He’ll have to show something in training camp overall. Including names like Tre Norwood and Damontae Kazee in this group would make it stronger overall, but I am calling them safeties for now, not cornerbacks.

The top three is intriguing in Pittsburgh, but after that there are too many uncertainties to feel good enough about this group.