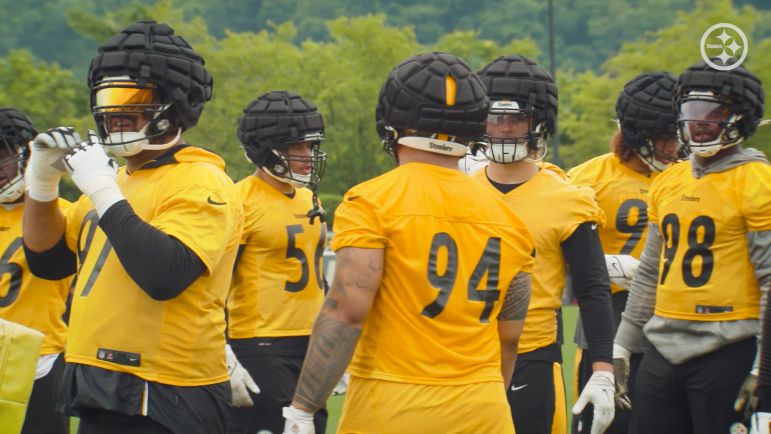 The Pittsburgh Steelers finished dead-last in the NFL against the run in 2021. If Pittsburgh has aspirations of making the playoffs again, that’s a stat that absolutely has to change. Inside linebackers coach Jerry Olsavsky knows it, and the players know it, too. Talking to Gerry Dulac of the Pittsburgh Post-Gazette, numerous Steelers players discussed improving the run defense in 2022

“We have guys coming back that know what we’re supposed to do, knowing we can get better, and I think we brought in some guys that can really help out, as well. Then, there’s a mixture of younger guys coming up where I feel we should have a number one defense,” defensive lineman Cameron Heyward said.

Chris Wormley attributed Pittsburgh’s struggles to players not understanding where they fit the defense. “That’s something we’ve been working on a lot. It starts with our run fits and knowing what to do. If you don’t know what you’re doing, you’re setting yourself up for failure,” Wormley said.

Pittsburgh seemingly had a lot of issues last year, with players filling the wrong gap or not being where they should be, which attributed to a league-high 24 runs of 20-plus yards. With some new faces on defense and a returning group that knows they have to improve against the run, the hope in Pittsburgh is that those mistakes will change.

Safety Minkah Fitzpatrick led the Steelers in tackles last year, which simply can’t happen again. Anytime a safety is leading your team in tackles, it means something has gone wrong. Running backs consistently being able to reach that third level is a serious issue, and Pittsburgh will need to address their deficiencies in the run game. After last season, which saw plays like heralded Detroit Lions running back Godwin Igwebuike run for a 42-yard touchdown against Pittsburgh, the returning players on defense have to make the run defense an emphasis.

The Steelers were lucky to make the playoffs last season, and a big reason why they did so (besides luck) was Ben Roethlisberger’s ability to engineer fourth-quarter comebacks, no matter how bad he played the prior three quarters. If Pittsburgh gets beat by the run and goes down in the fourth quarter, I don’t know if I have the same faith in Mitch Trubisky, Mason Rudolph or Kenny Pickett to lead the team back.

No matter how good the pass defense is, the Steelers have to be a complete team defensively. Improving the run defense into at least a top-20 unit will go a long way toward makings the Steelers contenders in the AFC North.