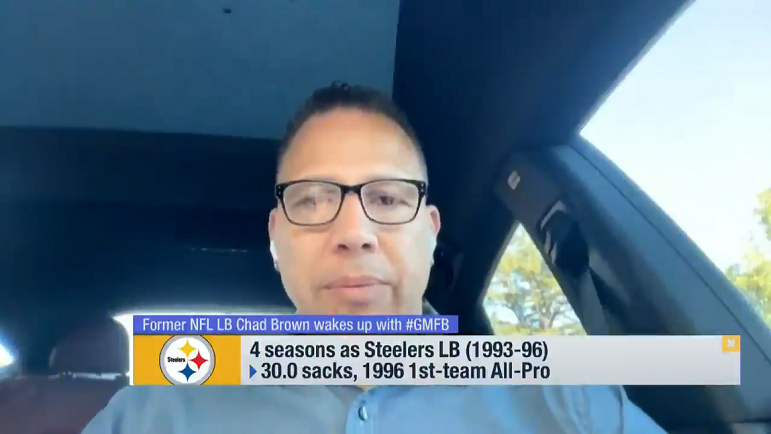 Throughout the illustrious history of the Pittsburgh Steelers, the linebacker position has always been stocked with elite-level talent across the board.

Appearing on Good Morning Football Friday on NFL Network, Brown spoke fondly of his time with the Steelers. Though his time was short, signing with the Seattle Seahawks as a free agent ahead of the 1997 season before spending time with the New England Patriots in 2005 and 2007 – including a reunion with Pittsburgh in 2006 — Brown left an indelible mark on the Steelers overall, putting his name right there with all-time greats in franchise history.

Here's some highlights from one of the best games of his career, 1996 vs Cincinnati: 4.5 sacks, 1 INT, 1 forced fumble

For that, he’s part of, as he calls it, football royalty.

“I think to be a Pittsburgh Steeler is really kind of being football royalty in some way. The traditions, their standing all across the league… and to be a Steeler linebacker is being a very special part of that football royalty,” Brown said to GMFB Friday morning, according to video via NFL.com. “And we’re watching highlights of some of these great Steeler linebackers. You mentioned my teammates Levon [Kirkland], Greg [Lloyd], Kevin [Greene], but let’s not forget about guys like Joey Porter or James Harrison.

Brown was a key cog in the Steelers’ defense, being able to flip from inside linebacker to outside linebacker, being able to drop into coverage but also get after the passer in a big way. He was a great complement to Kirkland, Lloyd and Greene under defensive coordinator Dick LeBeau in that 1996 season, putting himself right in the discussion for great Steelers linebackers in franchise history.

It’s certainly a royalty position at this point in the franchise’s history. Currently, three linebackers are in the Pro Football Hall of Fame. Harrison could join them soon, and Watt is on a Hall of Fame trajectory. Additionally, six are in the Steelers’ Hall of Honor, with Greene, Lambert and Ham in due to Hall of Fame inductions while being joined by Russell, Farrior and Lloyd.

More will join them in the coming years, and as long as the Steelers are the Steelers, great linebackers will be part of the franchise’s identity moving forward.