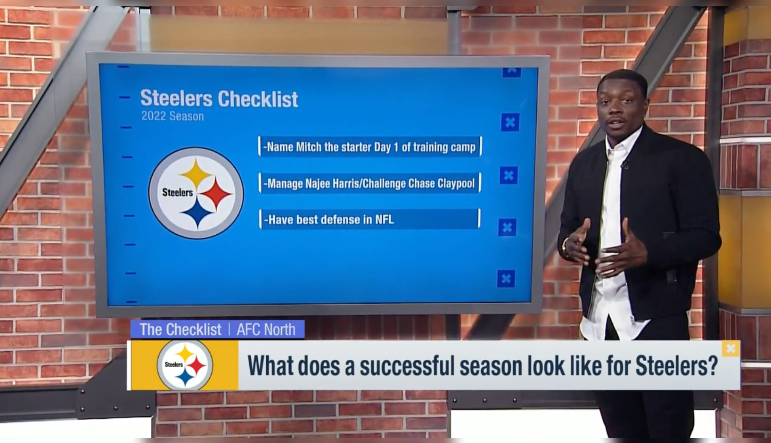 Now under two weeks away from the start of training camp at St. Vincent College in Latrobe, things are really starting to take shape for the 2022 version of the Pittsburgh Steelers.

Following an offseason full of changes from the front office, coaching staff, roster and stadium naming rights, Pittsburgh finds itself in a bit of a transition season. That doesn’t mean the Steelers won’t be competitive, though.

With a rebuilt roster featuring key additions at quarterback, offensive line, defensive line and linebacker, the Steelers could find themselves battling for a playoff position once again. To do that, there are three key pieces to check off throughout the 2022 season, according to former NFL defensive back turned analyst Darius Butler.

Butler, appearing on NFL Network’s Good Morning Football Friday morning, stated that for the Steelers to have a successful season in 2022, they have to accomplish three things. Those three things? Name new free agent signee Mitch Trubisky the starting quarterback on Day 1 of training camp; manage the touches for second-year running back Najee Harris, and challenge third-year receiver Chase Claypool; and have the NFL’s best defense.

Some of those will be easier said than done, but those aren’t out of the realm of possibilities for the Steelers.

The first piece to check off for the Steelers regarding naming Trubisky the starting quarterback on Day 1 of training camp is a bit of an odd one from Butler. Still, the logic makes sense overall.

“We don’t need another quarterback competition. We know who the guy is; name him,” Butler said on GMFB Friday, according to video via NFL.com. “He was the No. 2 pick a few years ago; he has talent. It didn’t work out there, but he’ll bounce back. Just name him the starter Day 1. When I think about the Steelers, I think about stability. The ownership, head coach position, and the quarterback.

“Obviously, you had Terry Bradshaw back in the day, Ben Roethlisberger who won Super Bowls. Put Mitch Trubisky in a position to thrive.”

Mitch Trubisky can make people miss too, huh? Might be seeing more of this considering the uncertainty of the Steelers’ OL. pic.twitter.com/q6AlnLgTgN

While the Steelers certainly aren’t going to name Trubisky the starter on Day 1 of training camp later this month, Butler raises a good point. All talk of a true “QB competition” feels a bit like a farce, to be quite honest. Rookie first-round pick Kenny Pickett isn’t going to get the necessary snaps in training camp to battle for the starting job, and Mason Rudolph is a guy that the Steelers clearly had very little faith in, drafting two quarterbacks and signing Trubisky in free agency early in the process.

Giving Trubisky all of the first-team reps and letting him really settle into the starting role would do wonders for the veteran in his third stop in the NFL. That said, the Steelers aren’t going to do that. Trubisky will have to earn it, and — like it or not — Rudolph is going to get a shot to compete.

Butler then continued on down his checklist, stating that the Steelers need to manage the touches of Najee Harris, while also challenging Chase Claypool in the process.

This offseason, the Steelers reportedly talked with Harris about limiting his workload some in hopes of keeping him fresher down the stretch. Pittsburgh hasn’t really done anything to address that workload, as the depth chart behind Harris remains a bit bare. Along with limiting Harris’ touches, Butler implores the Steelers to challenge Claypool this season. Of course, Claypool called himself a top three receiver this offseason, so it’s time for the talented weapon to show it.

“Manage his touches throughout the season. Don’t run him into the ground early; let him hit his stride late in the season,” Butler said regarding Harris’ workload on GMFB Friday morning, according to video via NFL.com. “You’re gonna have to ride his coat tail down the stretch. This is a young offensive line. You help young offensive lines by running the ball, you don’t have them going backwards all the time.

“Diontae Johnson is going to be awesome outside, but Chase Claypool…he went out and made a bold statement this offseason saying he’s a top 3 wide receiver. Let’s put him in position to thrive,” Butler added. “He has talent, he’s a big-play guy that can go up and get the ball. Challenge him early in training camp to have his best season yet.”

Finally, Butler highlighted the Steelers’ defense being the league’s best as a key for a successful season in 2022. Those are lofty goals overall, but with a star trio of T.J. Watt, Cameron Heyward and Minkah Fitzpatrick, not to mention the return of Tyson Alualu, the re-signing of Terrell Edmunds and Ahkello Witherspoon, and the additions of Levi Wallace and Myles Jack, the Steelers’ defense should be near the top of the league in 2022 under first-year defensive coordinator Teryl Austin.

Having an elite-level defense that gets after the quarterback, stops the run and takes the football away, coupled with an improved offense, should have the Steelers right back in the thick of the playoffs, much like they were in 2019 when Roethlisberger went down with an injury.

“On the other side of the ball, one thing I think about with the Steelers is their defense. They have one of the most expensive defense in football. Every year they’re getting after the quarterback; it’s Blitzburgh out there. You got Cam Heyward, you got T.J. Watt, you paid Minkah [Fitzpatrick]. Let’s have the best defense in the NFL this year.

“I think if you hit all three of these things, you’re looking at a good spot down the stretch for the Steelers.”

With the amount of talent on the defensive side of the football and the rebuilt depth overall after a trying 2021 season due to injuries, the Steelers’ defense is in line for a rather big 2022 season under Austin. If Pittsburgh’s defense can continue to get after the quarterback in a big way, improve the run defense and create turnovers, the Steelers will almost certainly find themselves in a playoff spot down the stretch later this year.