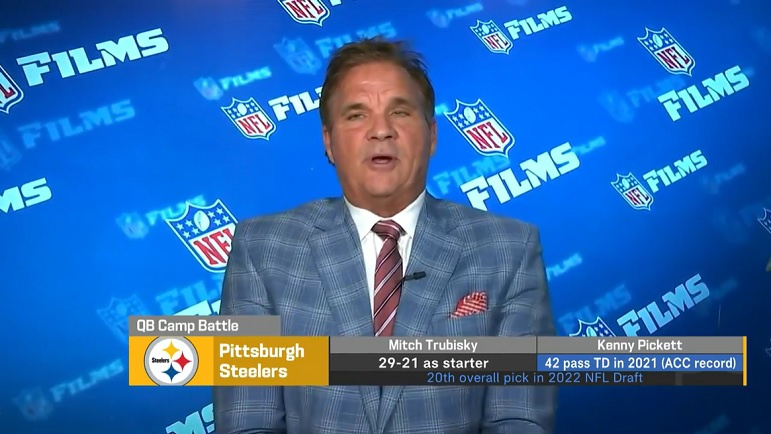 Ready for one more opinion on the Pittsburgh Steelers’ quarterback battle? Brian Baldinger offered his, flat out saying he can’t see a scenario in which rookie Kenny Pickett opens the year as the team’s starting QB. Joining NFL Network Thursday, Baldinger broke down the battle that he doesn’t really see occurring.

“I don’t believe Kenny Pickett is gonna win this job in the month of August just because he’s probably not gonna get the necessary reps or the time with the number one team to make that evaluation,” he said.

Managing reps may be the toughest hurdle Steelers’ coaches have to manage this summer. On paper, they’ve said three quarterbacks are battling for the top spot: Mitch Trubisky, Mason Rudolph, and Kenny Pickett. But with roughly only 50 team reps per practice, it’ll be incredibly tough to give each player adequate snaps to accurately evaluate their play. Even splitting reps between two quarterbacks can be tough enough. It’s reason to believe the current favorite and #1, Trubisky, will keep that spot throughout the summer and into the regular season.

And as Baldinger explained, even preseason reps will be tough to come by.

“The one thing about this whole training camp thing, they’re not scrimmaging anybody, right? They’re gonna go off three pre-season games.”

This will be the first summer the Steelers have just three preseason games. While most of the league transitioned to that last year, Pittsburgh had a fourth by playing in the Hall of Fame Game against the Dallas Cowboys to kickoff the 2021 season. Now, they have one fewer game to evaluate their three quarterbacks, making things all the tougher.

Baldinger admitted even evaluating Trubisky could be tough to do, seeing if he’s a different quarterback than he was in Chicago.

“I don’t know if you can find those things, if he’s improved, in just training camp practices. It might have to go into the season and you might have to weight his performance in real games before they make a real decision.”

For Pittsburgh, that seems to be the most likely course of action. How Trubisky starts, and by extension how the team begins, could determine how quickly they turn to Plan B.

Last season, the Steelers had 669 total team reps across 13 practices, an average of 51 per day. One upside is they’ll have an additional five camp practices this year. Couple that with roughly 70 offensive snaps per preseason game and the Steelers will have roughly 1130 snaps to play with (they also practice after they break camp but things are a lot more ramped down by then). So how could the snaps look? It depends, of course, but here’s a rough estimate.

Of course, that doesn’t take into account game-flow during the three preseason games. It just offers a view into Baldinger’s point. A little more than 300 snaps to judge a rookie quarterback isn’t much to go off of, especially knowing a fraction of that will come against an actual opponent and not the Steelers’ defense. The math of it all is hard to make work. Nothing is set in stone and injuries can quickly and dramatically change the landscape. But sitting here days before camp, Pickett will need to maximize his reps to have a legitimate chance to open the Steelers’ starter.