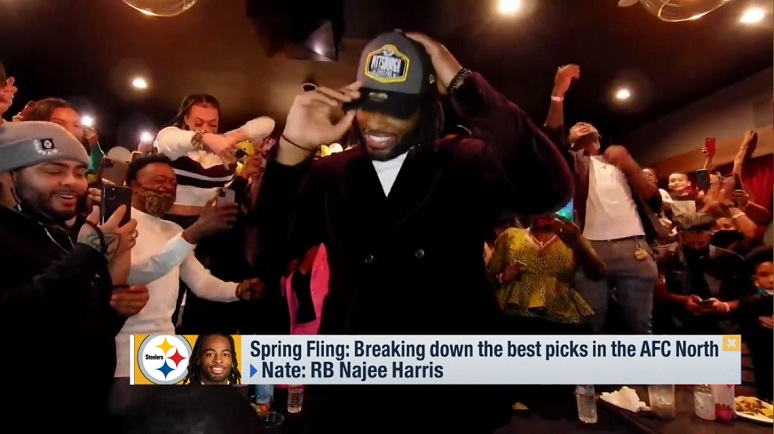 Most Pittsburgh Steelers first-rounders find out they’ve been drafted when they see that “412” area code appear on their phone with Mike Tomlin’s voice on the other line. Saying something to the effect of: “You ready to become a Pittsburgh Steeler?” There’s a formula for that first phone call. Talk to head coach, talk to Art Rooney II, talk to your coordinator, you get the idea.

Najee Harris’ draft night didn’t go exactly like that. Appearing on Bryan McFadden’s podcast All Things Covered Monday, Harris said he found out the Steelers were taking him from Snoop Dogg, not Mike Tomlin.

“I kid you not,” Harris told McFadden. “Snoop, he’s cool with someone with my agent and he’s like, ‘Hey, Snoop Dogg.’ It’s like, Snoop Dogg, ‘oh, what’s up bro?’ Because Snoop is big Steelers fan. Me and Snoop are pretty cool right now. Then he congratulated me. Then I talked to Mike Tomlin.”

Pittsburgh made Harris the 24th pick of the 2021 NFL Draft. Their interest in him was no secret throughout the pre-draft process and they sent the house to his Pro Days, though Harris never officially went through any testing. But Pittsburgh was looking for a durable, workhorse running back to replace James Conner, talented but oft-injured, and Harris was clearly the #1 back in the class. He had the size, the pedigree, and the competitiveness the Steelers looked for, an overall similar skillset to Le’Veon Bell.

Taking a running back so early runs counter to the analytical-narrative that backs aren’t worth it. And Harris admits he heard from media during the process about being the worst first-round selection solely due to the position he plays. But he’s thrilled to earn the vote of confidence from the Steelers.

“There’s people saying I was the worst pick. Running backs shouldn’t be picked in the first round…everyone in the [Steelers] building agreed we’re going to select this running back in the first round. I appreciate that and I would always show appreciation and respect the organization.”

Harris went on to have a solid rookie season as Pittsburgh’s feature back. He carried the ball over 300 times for exactly 1,200 yards while setting the Steelers’ single-season rookie record for receptions, finishing with 74. He’ll be counted on for a similar and perhaps larger role this season with the offense running through the ground game for the first time since Ben Roethlisberger’s early days. Harris could have a fantastic Steelers’ career, so long as his body holds up to the workload. And it all started with a phone call. From Snoop Dogg.