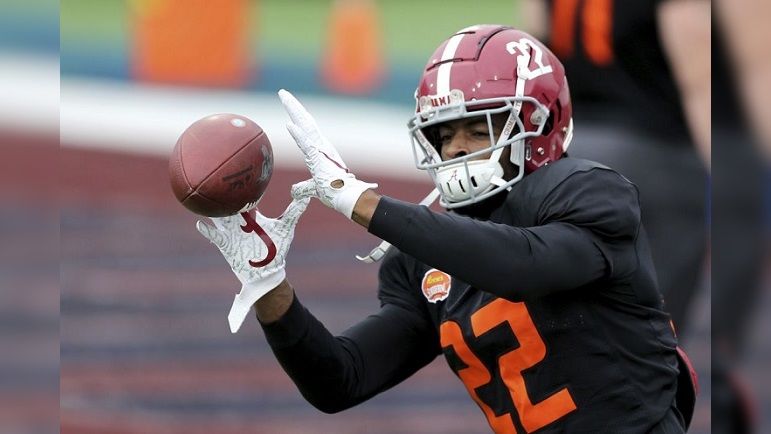 While there are enough superlatives to go around to describe the rookie season of Pittsburgh Steelers running back Najee Harris, my favorite statistic remains that he recorded zero fumbles in 381 touches. It is the most touches by a rookie ever without recording a fumble, and one of the top touch totals of any player without fumbling in a season in NFL history.

If one wants to be a stickler, of course, he did fumble during the postseason, but that was only after he suffered an arm injury in the finale of the regular season, which very clearly affected his ability to safely and effectively secure the ball.

Under normal circumstances, however, his ball security was fantastic, and is one of the reasons that head coach Mike Tomlin trusted him so much with such an extensive workload. But, in speaking with Bryant McFadden on the All Things Covered podcast, he credited another coach for that.

“I’ll give Alabama credit for that one”, he said. Alabama, there, Coach [Charles] Huff, Coach [Nick] Saban, they would get on me, anybody, ball carriers. I had 248 yards, five touchdowns, and one fumble. And they said that one fumble affects everything that you did good, or anything that you do. That one little fumble”.

Harris is making reference to the Crimson Tide’s game against Ole Miss in October of 2020, which they won, 63-48. Harris rushed for 206 yards on 23 rushing attempts with five touchdowns, in addition to catching three passes for 42 yards.

But he fumbled. And it was a big one. He fumbled trying to get into the end zone at the goal line on 1st and Goal at the one, the ball ripped out of his grasp. It happened in a 7-7 game toward the end of the first quarter. So, yeah, that wasn’t great. But still, it’s the overall body of work you have to acknowledge and respect.

“There, Alabama, they take that seriously. If I’m even walking around with the ball low, or I’m going through a hole and it’s clogged and you got the ball low or you’re swinging it out, anything, I’ll get in trouble a lot”, Harris said. “That’s just with anybody at Alabama. I took that to the NFL knowing that nowadays people don’t tackle the ball carrier, they just tackle the ball, so you’ve got to train yourself to mentally have good ball security”.

While he credited Alabama for his security mentality, it’s also something the Steelers and head coach Mike Tomlin preaches. Le’Veon Bell was once a great back in terms of ball security under him, as well. But ultimately, credit has to go to the runner. Harris had a great rookie year in a really underrated facet. Now he has to keep it up.