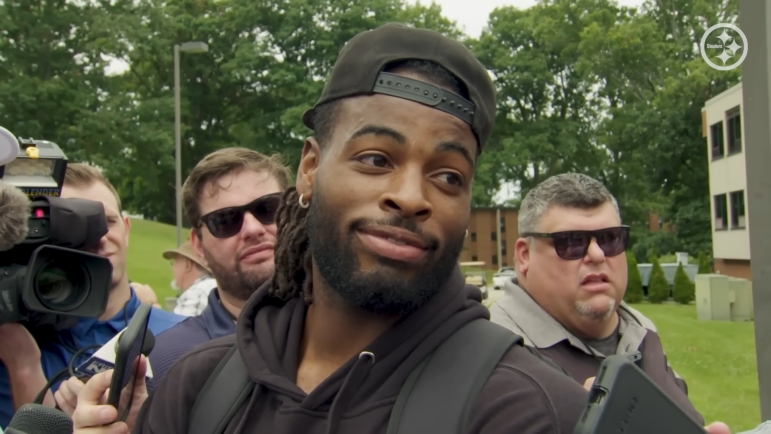 Second-year Pittsburgh Steelers running back Najee Harris recently told Bryant McFadden on the All Things Covered podcast that he would take on 500 touches if that’s what the team needed from him to win games this year.

In the past, he’s also talked about wanting the workload. He even said during OTAs that he was talking with the coaches, trying to fight for some more touches as they talked to him about getting him to take more time off during games.

But when it comes down to it, he knows the deal. Nobody can sustain a relentless workload and be better for it. It would be in everybody’s interest for the team to be able to find somebody else who can help lighten the load without a significant drop in production.

“I think there should be a second back. Off the fact that it’s just being a little smart”, he told reporters before checking into his dorm yesterday, via the Steelers’ YouTube channel. “There’s some plays where, if you watch my film, I get somewhat tired, and then those aren’t my best plays. But we have a good understanding of what to prepare for this year. There was a new back, and we’re just trying to find somebody else in the room”.

Including the postseason, Harris recorded 395 touches in 18 games during his rookie year in 2021. He recorded at least 20 carries alone in eight games, and with receptions, he added another three games with at least 20 touches.

Indeed, between Weeks 13 and 17, he rushed 100 times and added 18 catches, giving him nearly 24 touches per game in that span. His workload was perhaps only slowed down by an injury he sustained in the finale, during which he still had 15 touches on just 40 snaps played. Because, what did they have behind him?

Benny Snell Jr. was their second-leading runner with 98 rushing yards on 36 attempts, averaging a woeful 2.7 yards per carry. Kalen Ballage had 36 rushing yards on 12 attempts, and Anthony McFarland Jr. finished the season with three yards on three attempts. Only Ben Roethlisberger, JuJu Smith-Schuster, and Eric Ebron scored rushing touchdowns aside from Harris.

So they could sure use somebody else in the backfield this year. But it’s mostly the same. They didn’t retain Ballage, but Snell and McFarland are still here. Only just yesterday, they released Trey Edmunds and signed Jeremy McNichols, who epitomizes the word journeyman as he begins a stint with his ninth NFL team in his sixth season since being drafted.

Harris recorded 307 of the team’s 411 rushing attempts. That’s a 74.7 percent share of the carry workload, by far the most in the league. Jonathan Taylor finished with more carries at 332, though with fewer total touches, and a lower carry workload percentage at 66.5.

It’s fair to say, in Harris’ own words, that “there should be a second back”, because that’s quite an extraordinary workload when every other running back on your roster accounts for just 52 rushes.