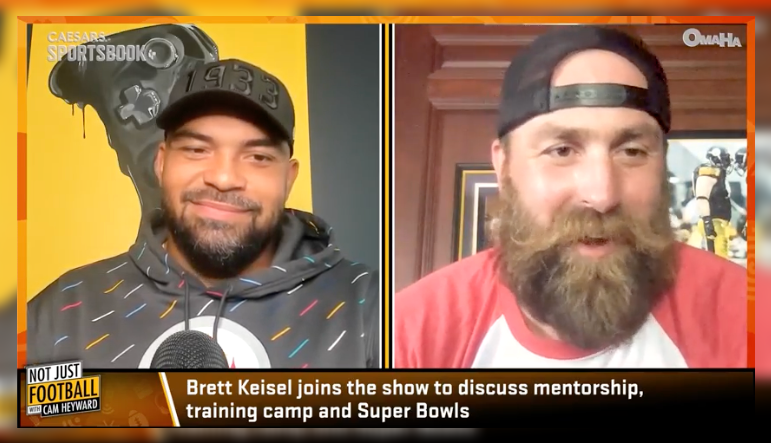 As a seventh-round pick in the 2002 NFL Draft, Brett Keisel took a long, curious route into a starting role for the Pittsburgh Steelers.

After working behind the likes of Aaron Smith and Kimo von Oelhoffen from 2002-05 along the Steelers’ stout defensive line, Keisel works his way into a starting role in 2006 and never looked back, playing a key role for the black and gold through the 2014 season, starting 114 career games for Pittsburgh.

Quite the find for then-GM Kevin Colbert in the final round of the 2002 draft.

Comfortably retired for nearly a decade now, Keisel — appearing on the Not Just Football with Cam Heyward podcast earlier in the week — stressed the importance of making an impact on special teams early in his career, which led to him sticking around a long time with the Steelers.

As a seventh-round pick, Keisel had a long road ahead of him to not only work his way into the rotation on a stacked defensive line, but to even grab a spot on the 53-man roster overall. Throwing himself into special teams work, serving as the wedge buster, and truly catching the eye of then-special teams coordinator Kevin Spencer went a long way for Keisel.

“There was only one way [to make the team], according to Mitch [Steelers’ then-defensive line coach John Mitchell]. You don’t have a job on the d-line. So it was like, ‘man, I gotta run down the field on kickoff and special teams,’ and that was the only place I saw myself getting a job,” Keisel said to Heyward, according to audio via the Not Just Football with Cam Heyward podcast. “So, I focused on that really when I was a young player. I focused on all my special teams. Obviously, I wanted to get better on defense, but I really felt like I could go out and be dominant on special teams and stand out on special teams.”

For three seasons (Keisel missed the ’03 season due to a shoulder injury) that’s exactly what the seventh-round pick did, becoming an invaluable member of the Steelers on special teams under Spencer, running down kicks and punts for the black and gold.

#99 Henry Mondeaux a four phase special teamer Sunday (17 snaps). Shades of Brett Keisel, another big 'ol #99 who ran down kicks and punts early in his career. 7th rounder who had to climb the ladder.

Big stick in 2002 against the Bengals. #Steelers pic.twitter.com/bRbbHUwYEN

That effort and overall commitment and determination went a long way in the eyes of head coach Bill Cowher, leading to Keisel getting the chance as a starter for the 2006 season after the departure of von Oelhoffen to the New York Jets following the win in Super Bowl XL over the Seattle Seahawks.

His time on special teams early in his career still serves as a reminder, even today, for young players on the Steelers trying to grab hold of a role and stick in the NFL. Though the league is a bit different and the game has changed, special teams still remains a key part of each team and each gameplan.

“So it’s important to be stout and strong in all three phases…I think that’s why you see, especially now, when people get into playoffs situations and stuff, you see a lot of starters playing in some of those special teams roles, because the margin for error is so small and winning and losing in the NFL that you need some dogs out there that are willing to go crazy.”

That’s exactly what every successful team needs, and that’s what Keisel was on special teams for three seasons for the Steelers. Nowadays, those roles are held down by the likes of Marcus Allen, Derek Watt, Justin Layne and more, making for a strong special teams unit overall under current special teams coordinator Danny Smith in the Steel City.

Though the game has changed and rookies, especially higher draft picks, aren’t being asked to play as much on special teams right away, that still remains the case in Pittsburgh under Mike Tomlin. In the end, sticking around on the roster as a depth player comes down to special teams abilities, which makes the Steelers deeper overall.