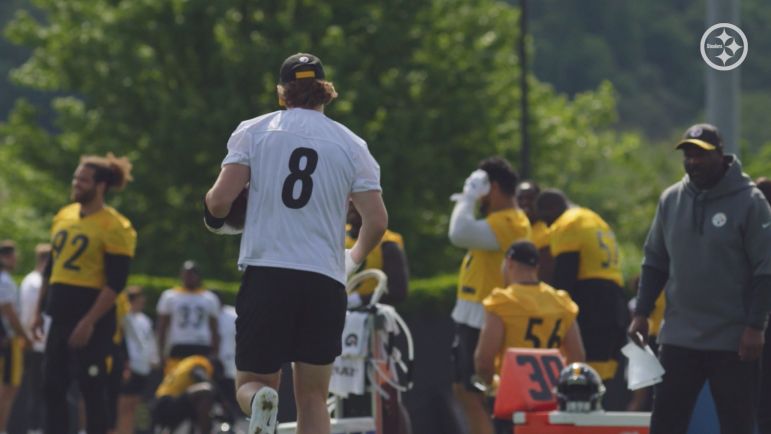 Entering his first training camp as a member of the Pittsburgh Steelers at Saint Vincent College in Latrobe, rookie first-round draft pick Kenny Pickett will have a chance to at least compete for the starting job under center ahead of the Week 1 matchup on the road against the Cincinnati Bengals on Sept. 11 at 1 p.m. to open the 2022 season.

Though he has received the third-team reps throughout OTAs and mandatory minicamp this offseason, there will be ample opportunities for Pickett to at least get some reps with the starters as the Steelers attempt to figure out who will open the season under center in the first season post-Ben Roethlisberger.

While he’ll be in the mix for the starting job with incumbent veteran Mason Rudolph and free agent signee Mitch Trubisky, Pickett — who spoke with the media Tuesday upon arriving in Latrobe — knows where he sits on the depth chart ahead of the first practice at camp, and stated to WPXI’s Jenna Harner that he’s not worried about focusing on competing for the starting job. Rather, he’s aiming to get better each and every day in camp and take advantage of the reps he receives.

Sounds like a grizzled pro already, at least when it comes to the media.

Kenny Pickett was asked what he needs to do to win the starting QB role out of camp pic.twitter.com/eFo23aj9wa

“Just being consistent and playing my game every day,” Pickett said to reporters when asked what he needs to do to win the starting job, according to video from Harner. “I’m just focused on getting better. That’s [the starting job] a long ways away coming from where I was in the spring and learning the offense and things like that. So I just want to compete and get better every day.”

While Pickett knows he’s at least the intended future franchise quarterback in the Steel City, nothing is going to be handed to him. To this point, nothing has been handed to him, starting right away in OTAs and minicamp in which Pickett was very clearly third on the depth chart at quarterback behind Trubisky and Rudolph.

Now, with camp having arrived and real football nearly underway, Pickett has an opportunity to let his preparation and play on the field throughout training camp and preseason action do the talking for himself and the Steelers’ decision-making. While he will have limited reps overall behind Trubisky and Rudolph to at least open camp, playing with consistency each and every day will open some eyes and push him further along in the process in Latrobe.

Though some may take his comments Tuesday as a bit of a negative that he’s not focused on competing for the starting job, it actually shows a lot of maturity from Pickett’s standpoint, which is focusing on what he can control and letting his play do the talking, rather than chasing the competition ahead of him, at least for the time being.