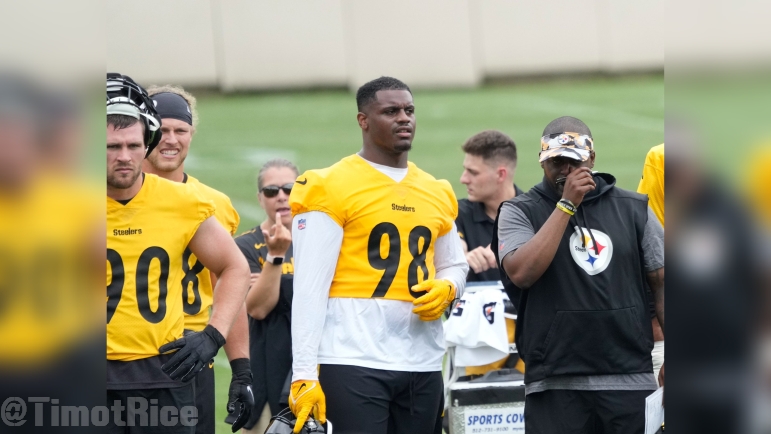 The Pittsburgh Steelers used the 2022 draft to focus on their offense. Three of their first four picks came on that side of the football: QB Kenny Pickett and WRs George Pickens and Calvin Austin III. Later in the draft, two others came on offense in H-Back Connor Heyward and QB Chris Oladokun. An offensive-driven draft, no doubt.

But during Wednesday’s first training camp practice, the draft picks who held my attention the most were the two defenders. DL DeMarvin Leal and LB Mark Robinson.

A word of caution. It was just one day. And it was a very light practice, probably one similar to the tempo and contact of OTAs. No pads, limited contact, and barely 90 minutes before the team broke for the day. But if you wanted to make notes of this rookie class, they came from those two men. Both guys were disruptive and made plays on the ball during the first practice. Leal stuck out in run session, blowing through the line on one snap to force Benny Snell to cut to his right. Had the session been live, a likely tackle for loss. Robinson looked better than expected in coverage, forcing an incompletion in team drills to TE Jace Sternberger over the middle, and even on a catch allowed to TE Kevin Rader in 7v7, he provided tight coverage and forced a perfect throw.

Leal is certainly benefitting from Larry Ogunjobi being limited in practice, working in individual periods but not team. Robinson is off on the right foot in what will be a tough battle to capture one of the final inside linebacker spots.

For Leal, his quickness and burst will be the way he wins. He’ll primarily be a sub-package player, Chris Wormley, Isaiahh Loudermilk, and some of Ogunjobi when healthy can handle base work along with, of course, Cam Heyward. Leal needs to be the gap-shooter, the penetrator, the guy who can twist and stunt and contain the edge and allow EDGE rushers to freely crash inside. Heyward has made many pass rushers rich off being able to do that. Bud Dupree turned his career around, but he had several sacks/pressures created by what Heyward did as the looper. Those are all boxes to be checked in the coming weeks and months, but Leal showed something Wednesday. A good start.

For Robinson, he was a big lump of clay. A running back for most of his college career, he flipped to LB in 2021 for Ole Miss, impressing early, winning a job, and putting up nearly 100 tackles in the SEC. He’s carried that quick-start ability to yesterday. It was obvious he could tackle and play downhill but playing in space and moving backwards. Yesterday, he broke up one of Kenny Pickett’s early throws for TE Jace Sternberger and looked comfortable playing in space and coverage throughout the day.

Again, these are just starts and this isn’t to put down the other Steelers’ rookies. Calvin Austin flashed his speed and George Pickens made an almost-great catch in team session, showing his ability to contort and adjust to the ball. Kenny Pickett, save for the final play of the day, took care of the football and ran the show well. But Leal and Robinson popped the most. In the early going, I care about seeing traits and both guys flashed during the first day of camp.