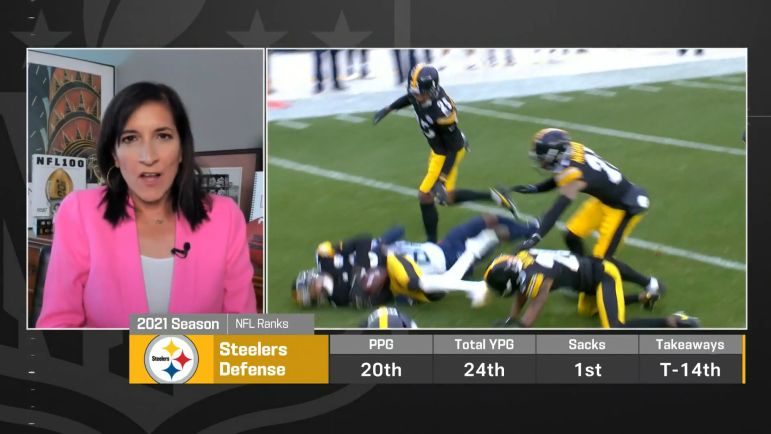 The Pittsburgh Steelers have a lot on their plate as they gear up for training camp in Latrobe next week. Never have they entered the grounds of Saint Vincent College under the yoke of head coach Mike Tomlin with so many questions that need to be answered.

While the offensive side of the ball is full of questions—starting with, who will start at quarterback?—certainly one of the biggest questions the Steelers have to answer based on how last season went is whether or not they can fix the run defense. That’s what NFL Network reporter Judy Battista says she will have her eye on this summer, as she explained during a recent segment on the league’s platform.

I’m looking at the defense, which despite having a great deal of star power, had a little struggle last year, especially against the run, and how are they going to mend that this year? It was a problem last year. Certainly you’ve got T.J. Watt, an outstanding pass-rusher. They have star players on that defense. But can they tighten up on this defense, especially in a division where we know there is firepower?

And you might have an offense that, let’s be honest, might not score as many points, because you have an unfamiliar quarterback situation now. So the defense, especially against the run, is gonna have to tighten up. Mike Tomlin has never had a losing season—remarkable—I’m interested to see if he can continue that with a brand new quarterback.

As if you needed or wanted any reminding, the Steelers finished dead last in rushing defense last season, both in terms of total yards allowed and yards per carry allowed. And it wasn’t all because of the occasional outlier runs, but rather consistently poor efforts, or at least poor results.

While we’re at it, I might as well recite the list of excuses for you. Stephon Tuitt never played, even though they expected him to, leaving Chris Wormley in the starting lineup. Tyson Alualu went down in Week 2, replaced by Isaiah Buggs for most of the year. It wasn’t until late in the season that they unearthed Montravius Adams.

At the second level, you had Devin Bush looking lost and uncomfortable on his surgically-repaired knee, and Joe Schobert looking like anything but a veteran run defender, but rather like somebody who had only been in the system for a month—which he was.

Nobody is blameless in such an overall poor effort, of course. Even Watt has conceded that he at times overplayed the pass, even though he is a more than capable run defender. Alex Highsmith is also able to set the edge and make some plays.

As a whole, you look at this defense, particularly the front seven, and you do see the talent there. Now with Larry Ogunjobi and Myles Jack in the spots of Tuitt and Schobert, Bush a year healthier, and Alualu back, and with the urgency of knowing that things have to change, will they have gotten their house in order when it comes to defending the run? Only time will tell.